On the Friday before Memorial Day I asked my wife Rebecca if she wanted try and shoot a spring Gobbler ? Having shot her first turkey, a hen, during our protracted fall season months earlier she gave me the thumbs up and a plan was put in motion. Following Lexi's preference for the afternoons we drove onto another property shutting off the engine about 3pm. As we drove in we saw a mature Gobbler displaying to a lone hen approximately a 3rd of a mile away from where I planned to park. Having hunted this property before I thought I had a fairly good idea of how to approach those two birds, concealed hopefully from view and then set up within a 150 yards or so. No doubt love struck this one Long Beard might consider a blind date engagement if given the chance.

While we tippy towed through the cedars we caught glimpses of another Gobbler that had shown up on the scene and at least two more hens had appeared. A half an hour later we crawled to the very edge of our selected cover and settled into the landscape. I let out a string of yelps and was met with immediate reply's from both Gobblers. For the next hour the gobblers and hens answered my calls and it was easy to tell they were slowly feeding in our direction.

The next time we heard the gobblers it was evident they had changed plans and dropped down into a very steep ravine and were headed over to very spot we had originally come from. A third Gobbler had joined the two other toms and the hens had vacated the area maybe to return to the nest. Gobbling to beat the band the 3 mature birds walked out of sight heading up the ridge-line. From where we sat going after them now would have only spooked them due to the terrain so we headed to the truck to prospect another location on the ranch. I was already formulating the next attempt.

Memorial day we pulled to a stop at just before 4pm, quietly shut the doors and listened intently hoping for a clue as to where the three Long Beards might be. Slowly we slipped down an over grown two track that I hoped would put us in good position to maneuver whenever we finally heard the birds. Not a gobble did we hear. Feeling more than confident the birds were close by I was reluctant to try and cover too much ground but did step out of the tree line to glass further up the fields above us. When I did all three gobblers spotted me about the same time I spotted them roughly 300 yards above us. Spooked but not frantic they started trotting up the hill away from us. Oh fudge !!!!!

My original plan A was now clearly down the toilet but as plan B was now showing even better promise. The birds were now traveling away from their preferred roost trees and it was still well before sundown. We dropped out of sight and clawed our way up that very steep ravine I mentioned from two days before. We were in fact following them uphill and in doing so now had put the roost sight 150 yards below us. Shortly we poked our camo netted heads over the lip of a dike and without seeing the gobblers I began to assemble an ambush spot at the edge of a clearing between two major groves of maples. A few limbs were cut and pushed into the ground, my camo netting strung between some other limbs and soon Rebecca had a nook to slip into that while offered a limited field of fire it gave her 100% concealment. It would have to be as if my plan worked the bird or birds would be right on top of her before she saw them. 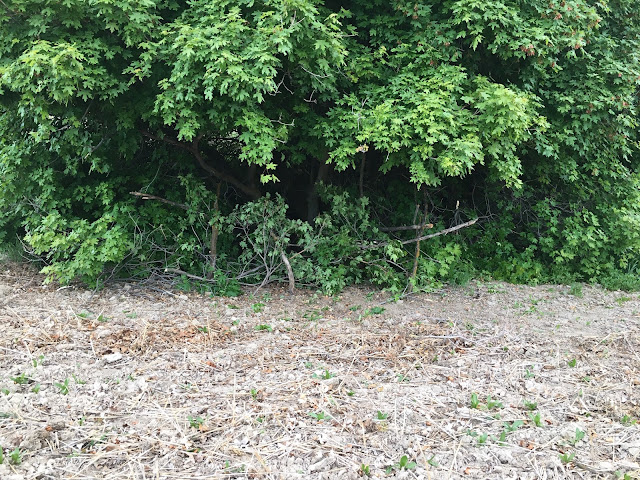 I had brought one Jake decoy that evening and placed it 27 strides away from her hide and in the direction of the the roost.  I quietly told her I felt the birds were less than 200 yards above maybe feeding but still on alert. I thought they would stay above us until actual sundown and then slowly make their way down the edge of the maples downhill towards us and the roost. If my guess was right the birds would just appear hard on her right side and may never utter a gobble or a cluck, in short they'd arrive silent and without warning.

I told she'd better have the shotgun at least leaning on the cross bar in front of her to keep her movements to a minimum if they did indeed arrive. I said they might get distracted long enough by the decoy to give her a chance to maneuver for a shot if it presented itself,  That I wasn't going to call at all and then said if they do arrive it likely wont be until after 8pm. She nodded and pulled up her face mask as I slipped into the tangle of maples 10 feet behind her. I had almost zero field of view but it didn't matter what I could see.

It was about 7:30 that I felt that leaving the Bug Spray on the kitchen counter was definitely a mistake as the mosquitos became persistent. Both of us endured the onslaught as best as possible and kept as still as we could. The sun dipped behind the horizon behind us and the stage was now set. If something was going to happen it would be pretty soon.

I saw the partial outline of a Gobbler hard to my right and his red head at what later turned out to be approximately 8:15. He was perhaps 15 yards away at the edge of the maple tree-line walking down hill. The maples were so thick he never saw me or Rebecca. I didn't dare hiss or whisper about his arrival I just watched. Then another bird appeared right in front of my wife perhaps 15 yards in front of the hide. Head out stretched it peered into the very space she was sitting and she never moved. Then the presence of the decoy got the best of him and he turned towards the fake. As he gathered himself into a fighting stance I saw her raise the the 20 gauge and pull the trigger in one fluid motion. The bird was flopping his last as we crawled out of the morass. I think my wife's eyes were the size of tea cup saucers. Her smile alone was worth the price of admission. I had seen this bird before as he had a distinctly crooked beard that a left hand twist. We'd seen him on Friday and I had seen him a number of times the year before hunting with Lexi. 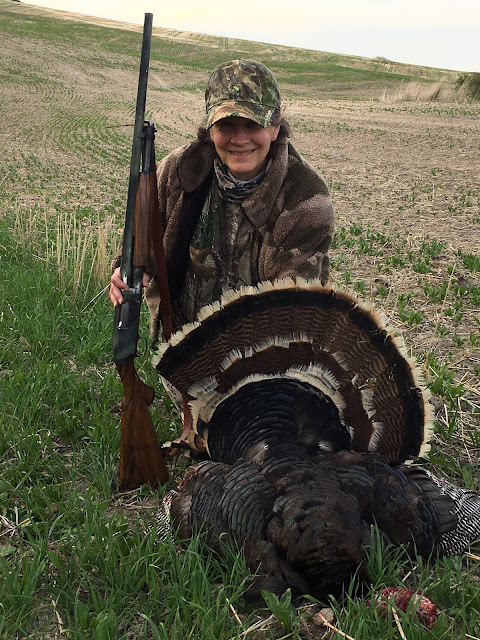 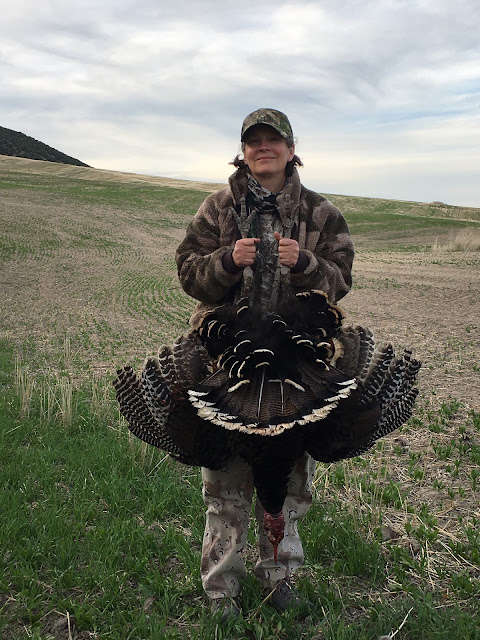 The bird was big, typical of an older mature Rio in our area and in prime condition even this late in the breeding season. We sat for awhile and talked about how he just appeared on her right flank almost close enough to touch when he walked in front of her blind. I congratulated her on not moving until he was distracted by the decoy and for a moment I think she'd forgotten all about the deek and its role in the ruse. She hadn't seen the other birds as she was riveted on the one almost standing at her feet.

The trip home in the twilight was quiet with both of us turning the evening over in our minds, Lexi was most impressed when we arrived and wanted all the details of how it happened having sat within 20 yards of that very spot the year before and had seen the that very Gobbler a number of times. All our tags were now filled, it has been a very short season for us. Hunting in Idaho was off limits due to Covid so we cleaned the guns, sorted gear and now wait for the fall season which can't get here soon enough.