You Just Can't Make This Stuff Up

In my last post I mentioned we had just received a Fisher Barrel Vise. Well, today we actually had to put it to use. We had been shipped a very clean Pre-64 Super Grade 375 H&H to do some minor work to. Unfortunately the rifles bolt came loose in the case and the US Postal Service must have used the gun case as a temporary truck ramp while it was in transit and some serious cosmetic damage occurred. As the barrel needed to be removed Brian went through the normal SOP with our current barrel vise that has been a mainstay in my shop for over 24 years.

Throughout the years we have run into a few barrels that the only way we could remove those barrels was to place the barreled actions in our lathes 3 jaw chuck and by using a parting tool right up against the receiver face cut a groove to the minor thread diameter into the barrel. By doing so this reduced the shoulder tension and allowed the barrels to removed but this method destroys the barrel. Fortunately all those barrels were to be replaced anyway.

The circumstance we faced this morning was quite different, this barrel had to be removed, re-blued and reinstalled. All Brian's attempts did not break the action free from the barrel. He finally threw up his hands and backed away from the task to re-group, an uncommon occurrence I can assure you. What I saw was a perfect time to remove our old vise and set the Fisher in place. This required a trip to town for some additional hardware and the relocation of a mounting hole. In short order the Fisher was in place. The Winchester barrel shank OD was approximately 1.245 and the bushing that Jerry had sent along had an ID of 1.250. I found and placed a .004 thick piece of card stock around the barrel shank, slid the bushing halves over the card stock then transferred the barrel and bushing into the vise. Since the upper jaw is spring loaded the installation of said barrel was painless.

Then I snugged down all four 3/4" bolts that lock down the bushing and barrel. This was done with a socket wrench. My old vise only used two screws to hold down the top vise jaw. The action wrench was then re-installed. I gave the action wrench a smart thud with a dead blow hammer and the action spun free from the barrel. It was just that simple. The vise is now paid for.


Now tell me, who writes these scripts ? 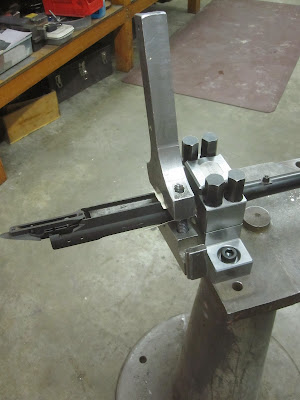 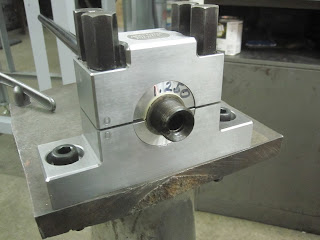 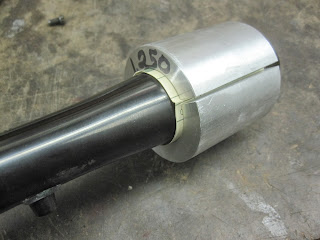 I picked up my new Jerry Fisher barrel vise at the Post Office today and later in the afternoon I opened the box and gave this tool the hairy eyeball. Visually it is apparent the vise was made by a talented machinist. The exterior and interior finish is excellent, the tolerances are tight. A class act in anyones book. 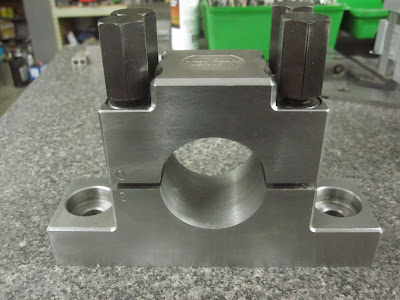 The upper jaw rises approximately .150 away from the lower base jaw. A damn handy feature when you're assembling a newly blued barrel and action as it gives you an ample margin of clearance to install and remove these freshly blued components without requiring a third hand to prevent marring the parts in the procedure.

A selection of aluminum barrel shank bushings are available from Mr. Fisher in a variety of common barrel shank sizes. Or you can make your own from standard 2" Aluminum or Micarta round stock.

The cost of the vise is $575.00 which I think for a one time investment is not expensive at all over the length of ones career. Good tools demand a fair price and are made to last. I have little doubt this vise will be a good addition to the shop. 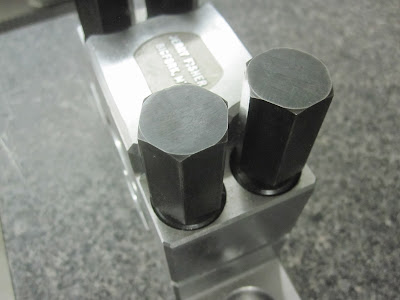 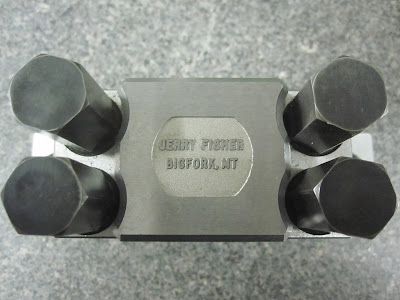 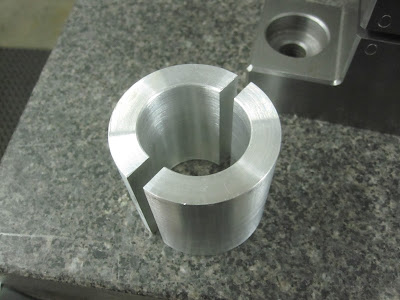