A View From The Porch

I got am e-mail yesterday from my sister in law that carried some expected but somber news. John Carr Jones Sr. had passed away at age 93 at home with his family by his side. Johnny owned and ran a cattle farm outside of Whitehall Virginia.  My wife's family were neighbors with the Jones's, separated on one side by a couple of creek bottoms, some rolling hardwood ridges and ultimately Johnny's Rhino proof fencing. The man could build a fence.

All three of Johnny's 3 children Jack, Cecilia, and Mary attended the same Jr & Sr High Schools as we did. My relationship with Johnny was born out of a similar appreciation for Turkey and Deer Hunting. While we never hunted together we did cross paths occasionally on the few two tracks and country roads that ran up and down the hollows and ridges around Pasture Fence Mountain, Foxes Mountain and Sugar Hollow. 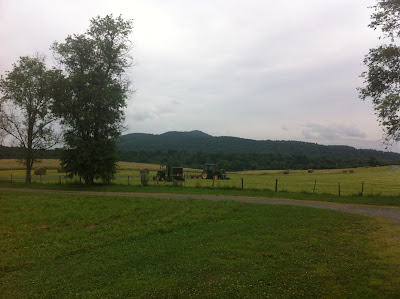 These chance meetings were always welcome encounters. I would usually be dripping in sweat coming out of the woods and heading for the cabin I lived in at the foothills below Pasture Fence. Johnny would pull to a stop,  roll down the window and shut off the engine. In a soft Virginia drawl he'd ask how I'd done, what I'd seen and where I'd been? I think it was the miles covered that always amused him the most. He'd push back his weathered cap and shake his head. "You're working to hard for that buck deer" he'd say softly with a chuckle. We'd talk about deer we'd seen, deer I'd missed, the ones he'd killed, acorn mast, if we'd seen any Bears and if Dick Holly's Bear dogs were running anything worth keeping up with. The subject of Turkeys seen, flushed and maybe called back always came up in conversation along with old Gobblers that never fell to the gun, cool mornings and being grateful to be amongst it all with his family.

In November laying on the seat next to him would be well kept Model 94 30-30, typical for the area. When the conversation was done he'd always offer me ride to put me closer to the cabin but I always elected to walk out. Eventually he'd give me a nod and a smile, start up the engine and roll on down the road to tend to things at the farm. What I can remember saying inwardly is there goes a truly happy man.

Within a few years I picked up and left Virginia and headed West. For the next 20 years trips back to Albemarle County were sporadic at best. Children were born, grand kids arrived, and all the while cattle grew fat in the Jones's fields. Johnny and I never wrote or called one another. But whenever I could and needed a break from the chaos of family and in-laws I would make a bee line for Johnny's house. If the weather was cool the visit would take place in his living room if the weather was mild it was always on the porch. 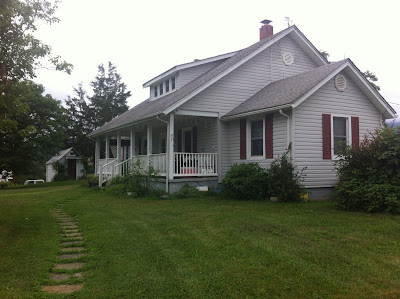 Johnny's porch faced East and just beyond the house his fields dropped out of sight into the Doylesville River. Looking Northeast you had a panoramic view of Foxes Mountain and to the North the mountains above and beyond Browns Cove. If I planned it right we'd be sitting there as the sun sank into the Blue Ridge behind us. On that porch over the years we tried to solve a few world problems, figure the rail weight and profit on steers and tried to determine how a Gobbler can completely disappear from sight without so much as leaving a turd to prove he was once in front of you.

Three years ago I saw Johnny for the last time. It was November just before the deer season was to begin. I had been told by family that Johnny was dealing with heavy medical issues that may one day plague us all. While his body was visibly frail his smile was the same as I had always remembered. We shook hands and once again began to catch up as we had so many times before. A care giver quit looking in on us after awhile and the afternoon fell into step as it had for the past 39 years. Johnny's voice was softer than I could remember but no part of his spirit was subdued, his mind was still keenly honed. We chuckled a lot. Finally the gal now entrusted with Johnny's medical affairs said it was time for us to draw it to a close. We shook hands one last time and he ended the meeting by saying "I hope I'm still around for your next visit, but I don't think that'll happen, it's been a pleasure young man, you take care now, give my best to your family"

I'll be in VA this spring. I will cross over the Moormans River just below Whitehall and follow the Doyelsville upstream to the country road that leads to Johnny's farm house. If I plan it right I'll be there just about dusk. I want to sit on that porch just one more time and talk to an old friend.