As I type this post the two Legends shown above are now in route to central Asia. The owners, a husband and wife team are on their first quest for Marco Polo rams. Both rifles are chambered for 300 Winchester, both equipped with pre-zeroed back-up scopes in the event of an optical disaster and both rifles shoot the identical load very, very well. Both Legends are outfitted with every option available and some that weren't an option until these two Legends were commissioned. Certainly the hardware is up to the task. These rifles follow in the foot prints of other Legends that have made this trek into Asia. I'm told that at 15,000 feet above sea level the temperature at this time of year will hover around 20 degrees as an average in the warmest part of the afternoon. The owners have put in a lot of honest practice at the range with much of that practice on the ground shooting over their packs, practicing with bipods and lord knows what else.

Success now will be largely due to the steel in their legs and the skill of their guides to get them within range of those coveted rams in the shadow of the Hindu Kush.
Posted by D'Arcy Echols & Co. at 8:11 AM No comments:

Taking The Next Step.

We had spotted the herd of antelope shortly after 9am. A mile away and from our current position and completely unapproachable. Lexi and I were familiar with this herd from two previous encounters.

The first weekend and stalk put us within 240 yards of this herd but Lexi's confidence in her ability to make that shot kept her from pulling the trigger leaving both hesitation and doubt sitting on her shoulder. She watched as that opportunity left her looking at departing heel dust as they ran. While she has been in the field hunting with my wife and I since she was 11 months old this was her first season carrying a permit and her own rifle.

The second attempt found us shadowing the same herd a week later, laying prone in some low sage and waiting for them to come over a rise. On the move and alert the group crested the hill 140 yards away directly in front of us. This time a solid case of buck fever settled in and Lexi just could not pull it together before the herd spotted us and broke for safer ground again. The walk to the truck was long and quiet but I could detect a change in my daughters attitude. What I saw was the birth of a predatory presence in her eyes. A number of times she stopped and looked back at the herd that was still in sight but on the move and putting more and more distance between us. When we made it back to the Dodge she scanned the now empty landscape and stated "we're coming back aren't we ? " it was more of a demand than question.

The next weekend found us hunting mule deer. She carried the rifle and I carried everything else. For four days and two afternoons after school we glassed until our eyes hurt. She gained and lost altitude without a complaint, as long as there was food in the pack she was good to go, distance be damned. At dusk the second evening we both lay in a bed of boulders with a young fork-horn feeding unaware of us. We had spotted a much larger three-point feeding with the same fork-horn from a ridge now far below us a half an hour before. We had made the scramble uphill as fast as we could cover ground and then crawled on our bellies into the position we now held. Try as we might we couldn't spot the three-point anywhere on ridge across from us. The light was fading quickly and I told Lexi if she was going to shoot it was now or never. She settled in behind the scope then softly said "we've seen two bigger bucks dad, lets pass this one up". I chuckled, It was her call, not many first year hunters would have. I suggested she remove the round from the chamber and dry fire a couple times on the fork-horn. Perplexed at first she did as I requested, the muzzle this time appeared immobile, her breathing collected as she pressed the trigger each time. This dry run would later prove to be an asset. As we backed out of the area undetected I made the comment "that buck has no idea how lucky he was tonight" I saw her smile in the twilight as we walked off the ridge. I could again sense a confidence in my daughter that was not there before. For the rest of the deer season the mature bucks eluded us. Ending the season with an un-punched permit surely wasn't due to lack of effort.

As her doe antelope permit allowed her to hunt well into the fall, the following weekend found us back in Rich County under an overcast sky. By now we had a good idea as to where the antelope herd might be at that time of day on this ranch. I nosed the truck along stopping just under the brow of each rise got out and peered over each hill top before leap frogging ahead. In due course I spotted the herd. The only real approach was to back out of the area, drive the truck into another basin far to the South and begin the stalk from there. By now Lexi had a developed a familiar routine with her kit, had an idea of what she needed in her pack for that day and confidently loaded the magazine of her rifle. We slipped on our packs and lined out. The route was direct as we were behind a series of ridges and out of sight of the herd. As we crept to the crest of the ridge I spotted the herd feeding but still well out of range. Before us was a large basin with the antelope on the farthest side of the valley. I suggested we have a snack and wait for them to bed down. An hour later the herd folded into the sage, we policed up our gear and backed off the ridge line and made an up-slope loop to gain more altitude to hopefully cover our approach. 30 minutes later found us exposed again and yet another loop was made. Each move put us closer to the herd.

Eventually the resting herd was completely out of sight. We could make one more loop that would put us directly above the herd but the wind would likely give us away so I elected to drop into the basin below us, hit a dry creek bed and use the creek bed to hide our approach. Lexi bailed into the basin with intent.

When I felt we were within 300 yards of the sleeping herd we went into stealth mode. I had Lexi chamber a round, safety on, muzzle to the side as we began the most critical part of the stalk. The creek bed allowed us excellent cover, the wind was in our favor and that familiar feeling of a stalk going perfectly sucked us further down the draw. Scanning the hillside above I finally spotted the tips of the bedded bucks' horns. We had closed the gap undetected. It was now time to set up and wait. I had Lexi strip the round from the chamber for safety sake as we crawled like lizards for the last 50 yards to a lip on the creek bed. I pushed my pack into a gap between two clumps of sage and Lexi crawled into a solid prone position, slid the 260 Rem Legend onto the pack, pointed the muzzle up the hill and chambered a round. One doe stood up but didn't offer a shot due to the surrounding sage. Another and then another stood to stretch and began to feed. Like the first doe neither presented a clear shot. Lexi asked about the range, I told to aim directly where she wanted the bullet to go as we were close. The buck now stepped into view and more of the herd came to their feet. Lexi's breathing was under control.  She shifted from one doe to the next as they fed in and out of the sage. I could still see three more laying down that looked as if when they stood up they might be fully exposed. I mentioned this to her and she shifted her body and muzzle slightly to the right. One of these bedded does rose to its feet but walked directly away from us. Lexi asked me if she could place her right elbow on my left shoulder blade for support in this new position.  I lowered my head and shoulders and became part of the desert floor. While it left me unable to watch and monitor what was about to happen I was confident in her ability, this was now her gig. As I lay face down in the dirt I heard the safety disengage and I tried not to move a hair. Lexi's breathing went flat and she turned the bullet loose.

The unmistakable sound of a hit followed the report of the rifle. When I looked up Lexi was trying her best to reload and follow the path of her intended target as it ran down the ridge towards us. I could tell the doe was dead on her feet and in seconds it piled up in front of us. She kicked her last in the red dirt and sage that she had been born in. I could see both the look of excitement and conflict in my daughter's eyes as the dust settled before us for a moment, even the wind ceased. 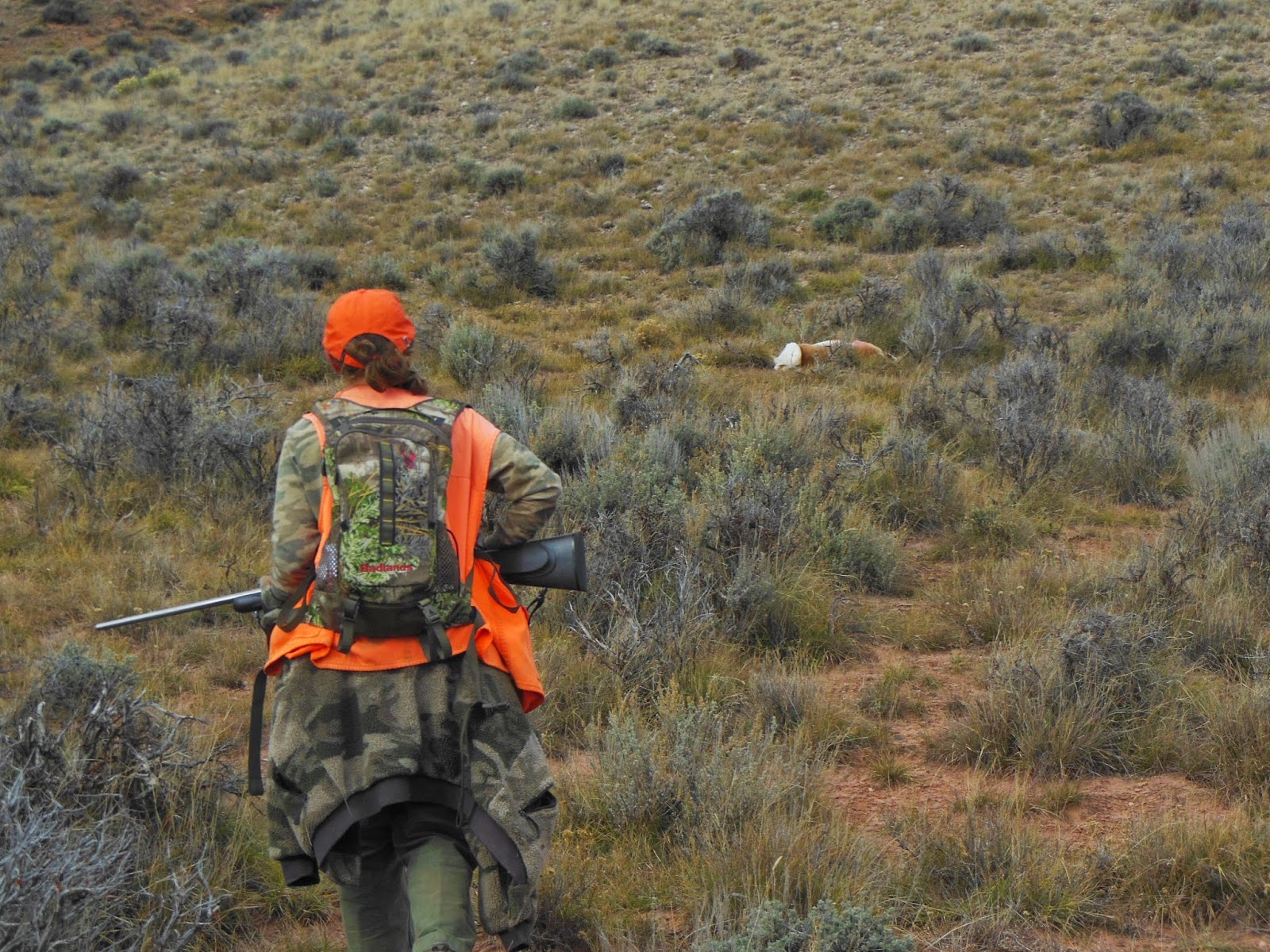 We got to our feet and approached the doe. Her bullet placement was textbook. I was beaming and congratulated her on the shot, all those years of practice had just paid her back in spades. Then I left my daughter alone with the doe and her thoughts and went to recover our gear scattered along the creek bed. I took my time letting her deal with the moment on her own. I saw her kneel down next to the doe and knew all to well what was going through her mind. We sat on the side of that hill for 5 or 10 minutes talking about the stalk, life and death and what had just transpired. 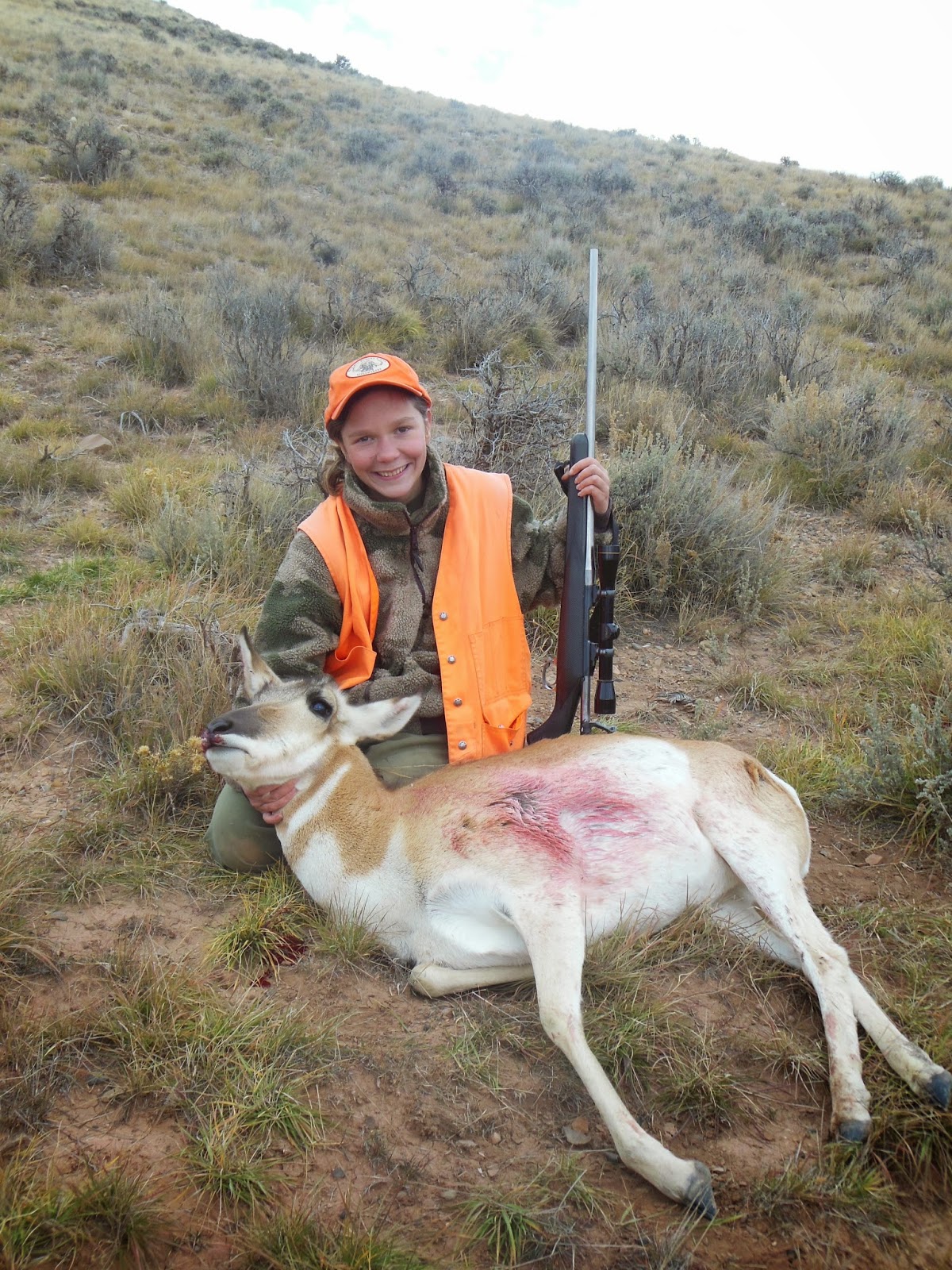 Finally she opened up her pack, pulled out her knife and began the primordial task of making meat. Within an hour we had the packs loaded, gave our last respects, looked around one last time to soak it all in then began the trek to the truck. Lexi stopped a few times on the way to look back at the basin, I know she could see the carcass and I knew she was reliving the moment over and over in her mind. 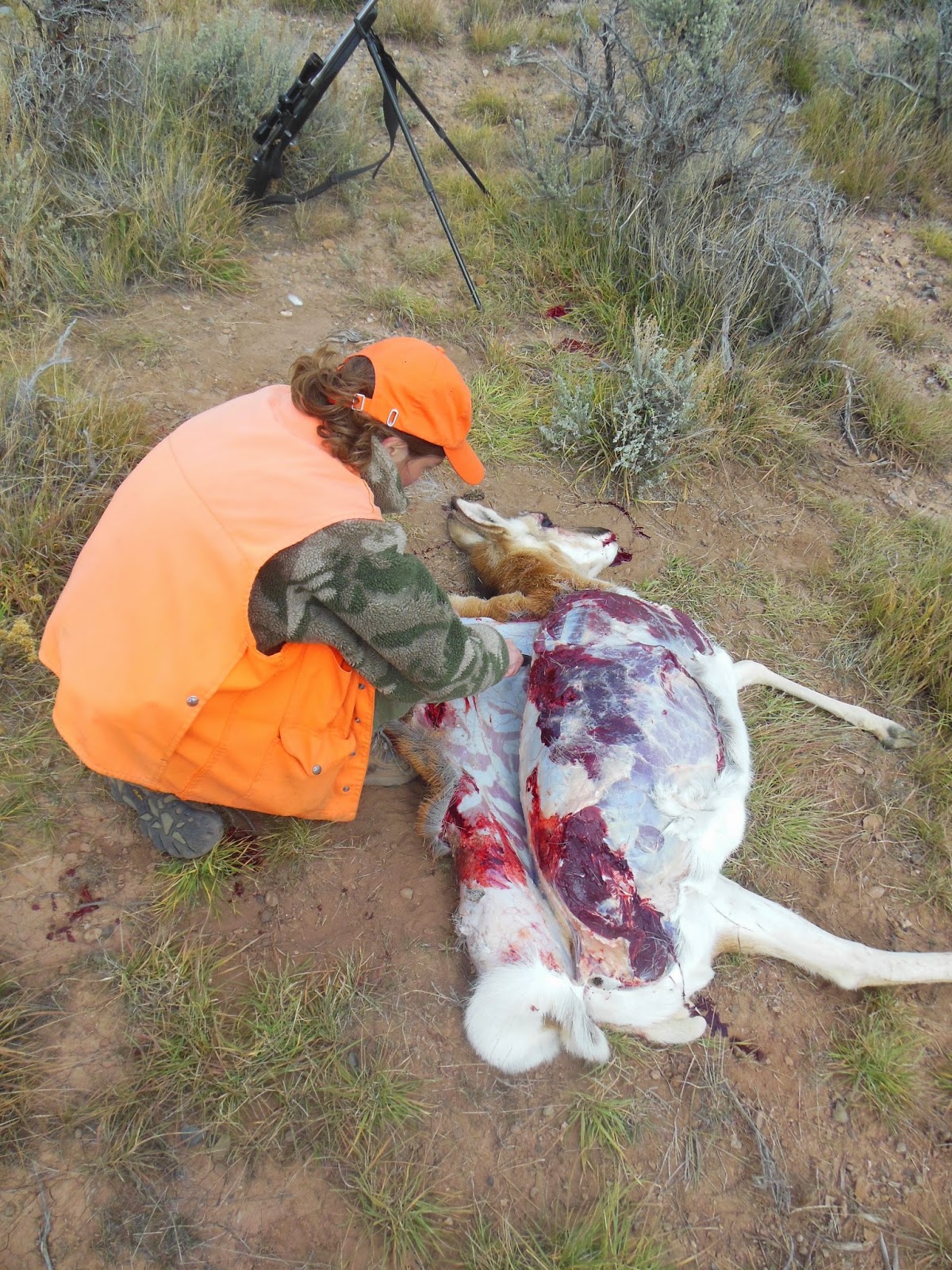 Red dirt shifted under our boots as we made our way back to the truck. We stopped a few more times, she sent a text to her Mom and I then asked her if she wanted to carry the pack full of meat the last 300 yards to the truck. The load was heavy but obviously not a burden, she wanted every part of the experience. 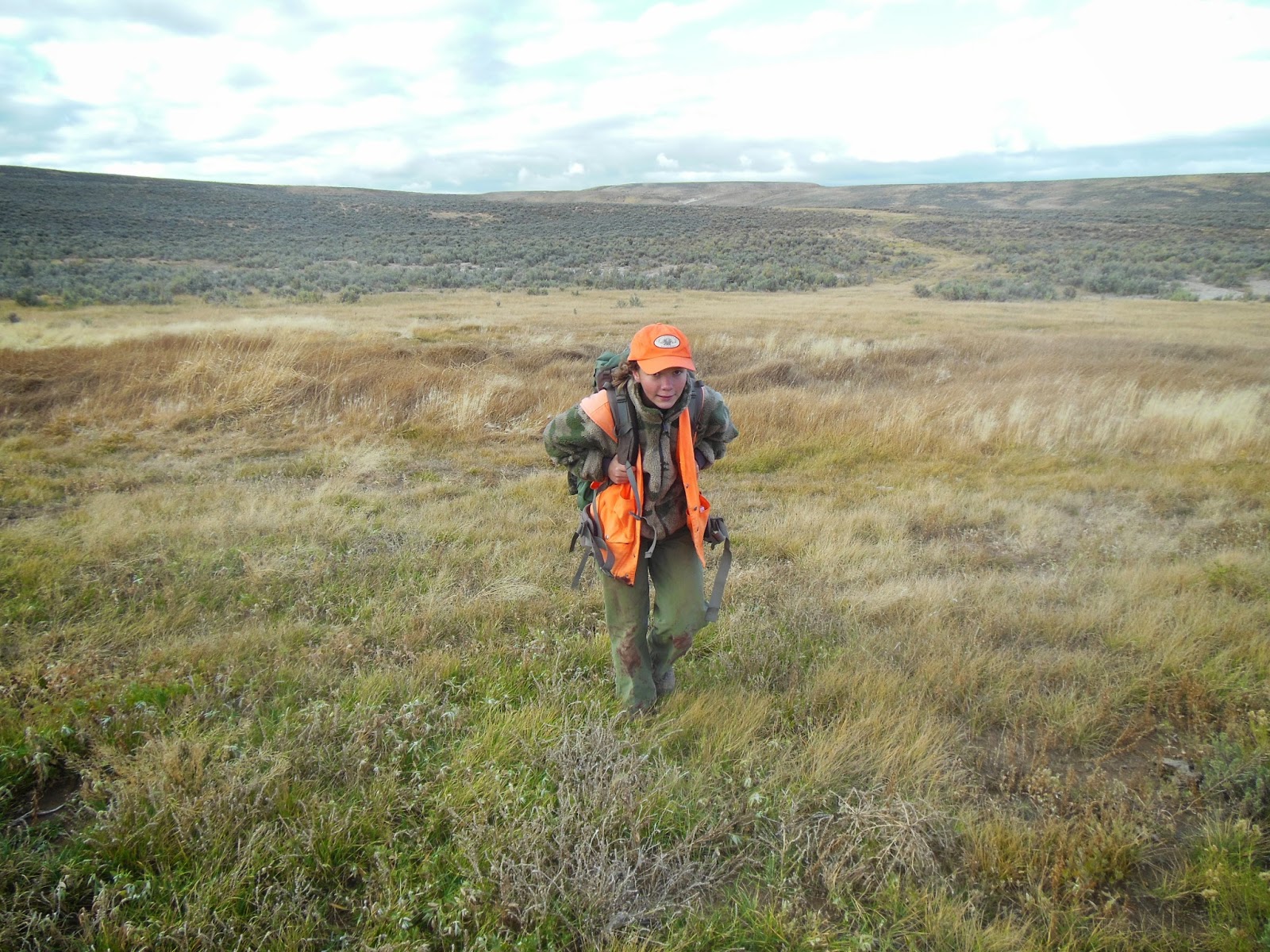 Memories are made everyday, every now and then some are made that will last a lifetime.