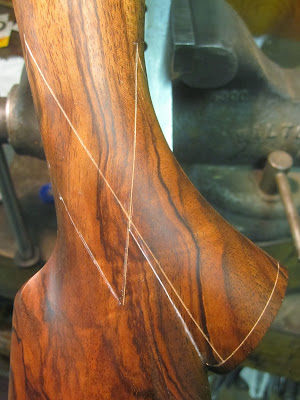 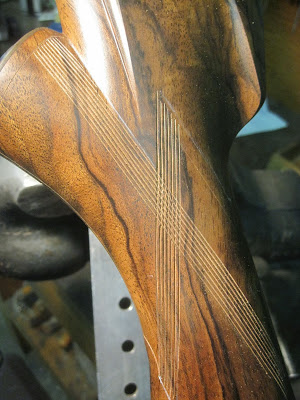 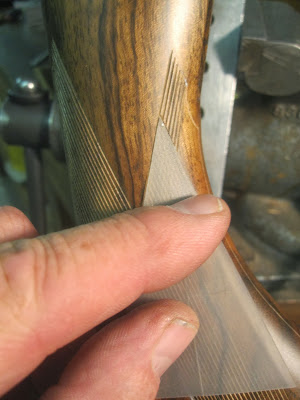 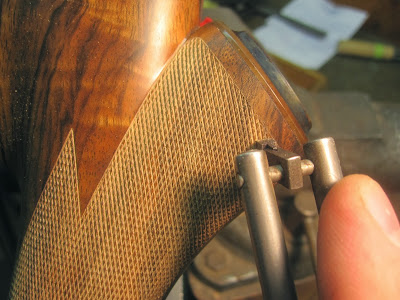 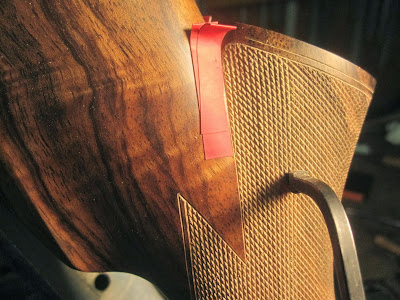 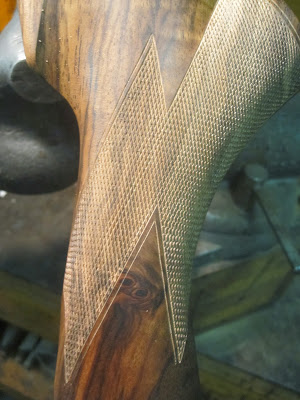 The Final Stretch, Finishing Up The Forend Checkering

Once all the lines in both directions are spaced I make sure the pattern as a whole looks balanced. I will add a line to extend the tail on one of the major points if it's to short, extend one of the top border lines to match it up with the corresponding border on the opposite side. The pattern must appear to be geometrically pleasing. The final lay out must be done with thought and care so as not to create more work than is necessary. When I'm satisfied with the overall pattern I then lay out and lightly cut in the borders.

The next step is to deepen the pattern and bring the diamonds up to points. I start with a 75 degree cutter and make at least 2 passes in both directions over the entire pattern. In the corners I use a short corner cutter and a V tool. Then I make two more passes using a 90 degree single line cutter. Care must be taken to stay in the track and not plow a line out of the groove and start another unwanted line. In the words of the late Len Brownell when you come the border of the pattern you "stop"the cutter to prevent over runs. Then I use a Super Fine 90 degree finish cutter to point up the pattern and make all the grooves appear to be the same depth.

The typical Mullered border uses a radial groove that lays between the main pattern and outermost line of the border. The Border I use I shamelessly borrowed from Monte Mandarino and Monte robbed it off and early Haenel stock. For me it was love at first sight. Some call it a Window Box effect, others a Shadow box, call it what you want it's not all that hard but does take more time to execute. I cut this border in on angle that drops away from the outer edge of the border and falls towards the base level of the diamonds. This is done with a narrow razor sharp chisel, a file and a set of dog foot chisels to establish the corners or tails of the points.

With the forend finished I move to the grip. 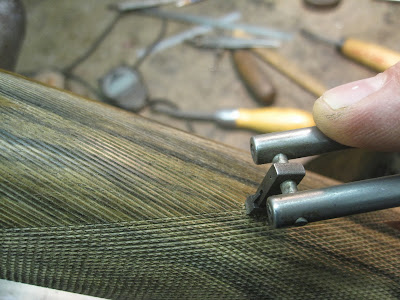 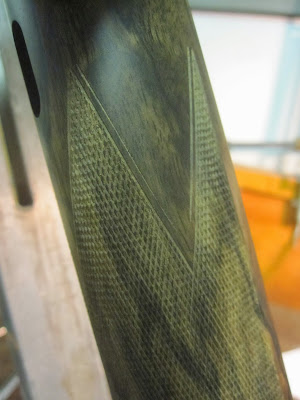 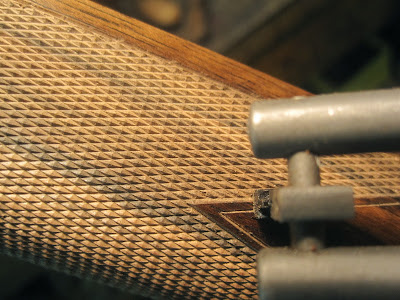 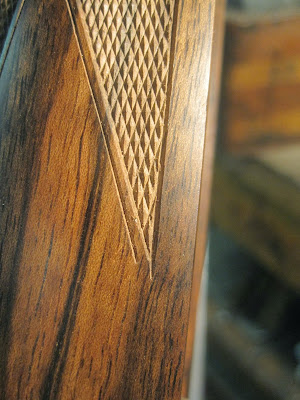 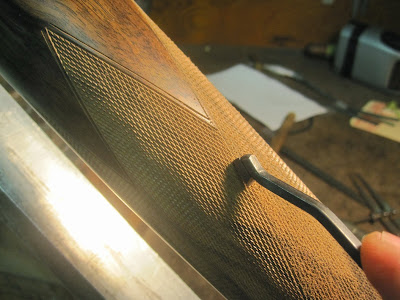 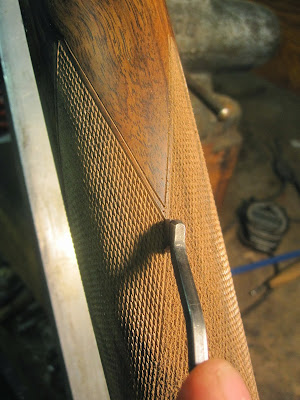 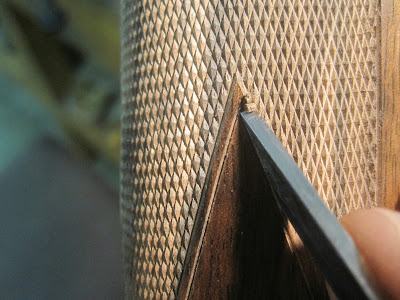 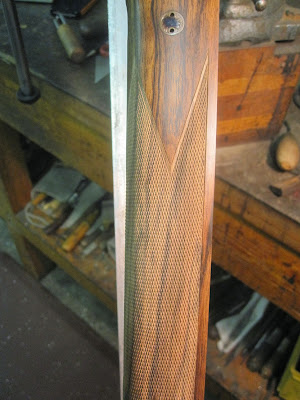 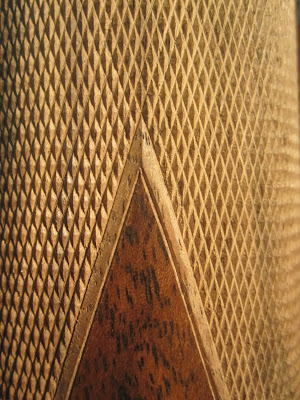 I am always glad to start the checkering on any project as the end is in sight. While I have owned and used two different MMC electric tools over the years for the layout. I never was happy with either and returned to using standard push hand tools. The MMC didn't seem to save me anytime and at least in my hands a mistake could happen in an instant that was difficult to repair or incorporate in the pattern. Today I generally checker 24 lines per inch and have an open point pattern I use 95% of the time that has a bordered perimeter.

I start the pattern by laying out the two top lines on either side of the forend. These need to be the exact same length and in the very same position. These are laid out with wooden jig and a dog leg scribe. I  then use a 60 degree cutter to deepen these two boarders. Then using a piece of copy paper I have wrapped around the forend I mark the ends of both these freshly cut lines as accurately as possible with the paper immobile and very taught. I use this marked paper to give me the volume of the forend in the length of the pattern to be cut. I find and establish the centerline based on the forends volume and add a 3" to 1" set of master lines on this template and draw in the pattern I want to transfer to the stock. All the boarders are laid out on this paper template.

When I have the pattern exactly like I want it tape it to the stocks forend and transfer the pattern to the wood with a tiny prick punch. When the entire transfer is complete I remove the paper and using baby powder to highlight the pricked holes make sure all is well. Changing anything at this stage is very difficult so diligence and accuracy while making the paper pattern and in the transfer is very important. Using the same 60 degree cutter I cut in both master lines and begin cutting in the lines with both a 2 and a 3 line cutters that cut on the pull stroke. All the teeth are cutting teeth, I do not like the safe edge cutters. I will space 4 lines in a singular direction then reverse the stock 180 degrees and cut in 4 more lines from the opposite direction and on either side of the pattern. When I'm spacing the pattern I do so standing up otherwise I tend to allow my lines to drift if I'm sitting. I also layout lines parallel to the master lines around the forend to check from time to time to keep me in sync with the desired results. If my lines start drifting I make corrections at that time. 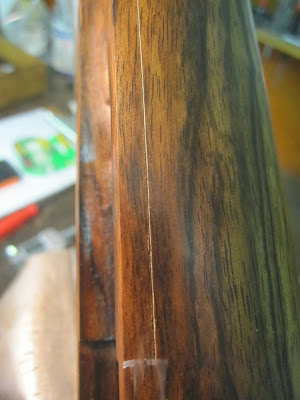 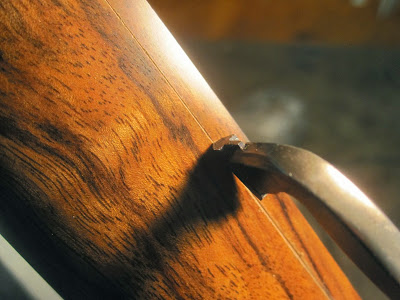 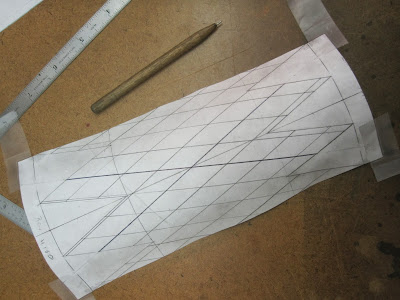 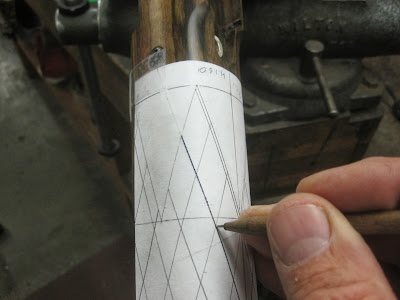 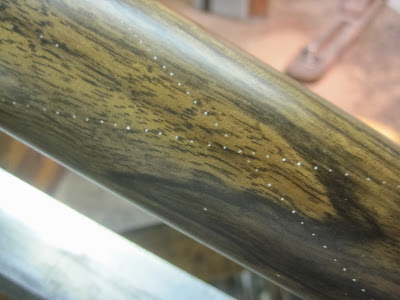 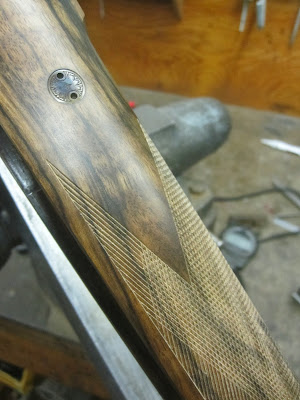 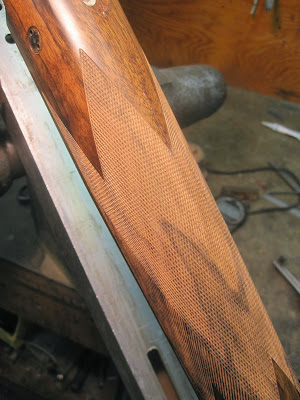 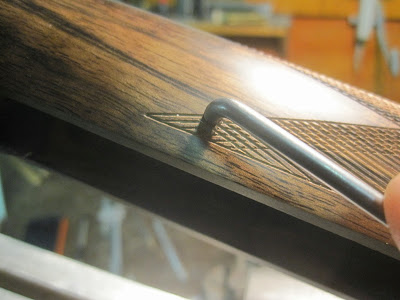 I have once again had the pleasure to guide 2 more Antelope hunts in New Mexico and as usual it was a grand time. The event took place on a ranch in the North Eastern part of the state that I have been guiding on for many years. The hunt was arranged through Kim Bonnett owner of Bucks and Bulls based out of Lindon Utah (www.bucksandbulls.com). The first hunter to arrive was Grant Bledsoe and our mutual friend Gary Merrill tagged along as an observer. This was Grant's 3rd hunt on this ranch and Gary's 2nd time to insure crowd control. We spent the first 2 days of Grants 3 day season looking over many mature bucks. At close to 100,000 acres this selection process can take awhile. At dusk on the 2nd day we found a buck that Grant wanted to try and take and the stalk was on. We lost the buck as the sun set but felt he'd be same pasture at daylight. True to form we found the same buck right at dawn the next day. We watched the buck from roughly 1200 yards until he bedded down on a low ridge line that allowed him an unobstructed panoramic view of the short grass prairie and allowed us no topography to use as cover for a stalk. Gary suggested an air strike, Grant was looking up the number at Cheyenne Mountain, I decided to go deep and prepared to throw the bomb.

It was time to deploy the Trojan Cow. Both Gary and Grant gave me an instant fish-eye and the good natured ridicule began. Grant however has hunted with me before and has learned to unclip the leash and let me run so he grabbed one side of the bovine silhouette and did his best to bite his lip and endure the laughter coming from Gary as we "grazed" towards the bedded buck. We covered about 1000 yards in 45 minutes. The buck finally stood up as I moved Bessie away from Grant to allow him a prone 223 yard shot. I haven't heard anymore disparaging remarks about the flat cow since the buck hit the ground.

Grant was using what was to become the first real prototype Legend. Made on a Left Handed Remington 700 and chambered for 280 Remington this rifle has traveled the world and has always delivered when called upon. After very little load development Grant settled on a load of IMR-7828 and a Swift 160gr A-Frame. Grizzlies, Sheep, Moose, Leopard, Elk, Waterbuck, Kudu, Sable, herds of Impala, etc have fallen to this rifle. This was Grant's 3rd Record class antelope taken on this ranch with me and they all look quite different. This one carries 19 extra points around the prongs on both horns giving mass a whole new definition. 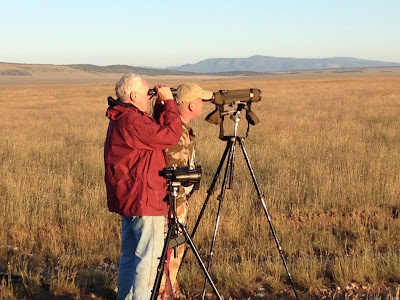 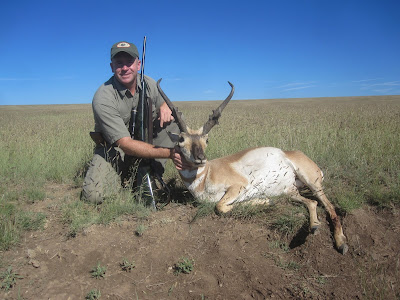 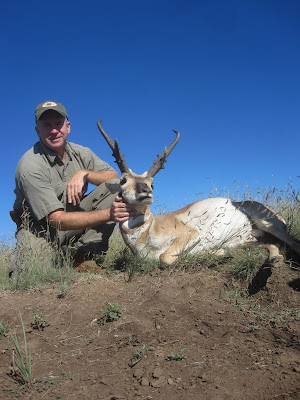 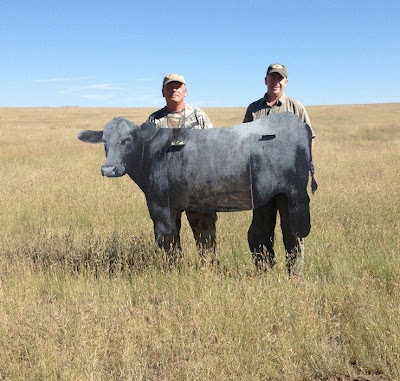