Not long ago, a client of mine bought an older Ruger # 1. His intention was to turn it into a tree stand rifle for one of his kids. Could I check it over to ensure it was safe and operational and mount a scope on it ? As this job would only take an hour and break up the monotony of a week long stint at the checkering cradle, I agreed to do so. Earlier in the year, I had mentioned to him an online company that was selling Zeiss Conquest at a very good price. Bingo we each made a purchase.

When it came time to actually mount the scope in the rings it was evident that the only way that Zeiss was going to fit in those Ruger OEM rings was with the aid of a 10-ton press. The tube OD on all of the newly purchased Conquests ran 1.0032 to 1.0034" and not 1.000". 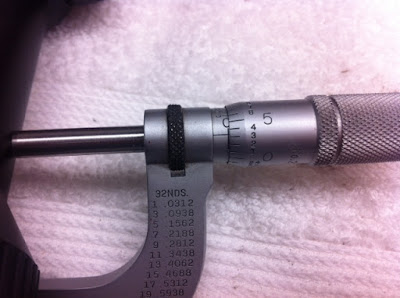 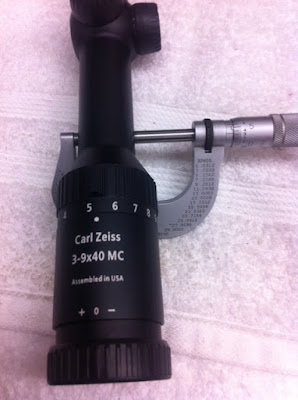 I have run into this situation a few other times in the past with Zeiss scopes. 27 years ago, I purchased a then current production Diavari 1.5-6X42mm variable that was .007 under the standard 30mm call out behind the turret housing and .008 larger than nominal 30mm ahead of the turret housing. Since this was before Al Gore had invented the NET I called Germany to ask whether this was normal. The response from Zeiss was "what counts is the precision within the scope and not the dimensional variation on the outside of the tube, have a nice day. Auf Wiedersehen"  That scope was sold as it was not compatible with detachable mount system I had just installed on the rifle and kept sliding forward under recoil due to the radically reduced tube diameter.

A number of years later I had a client that wanted a new Zeiss that had yet to hit the open market when the rifle was being built. A prototype of this scope was displayed during that year's convention circuit and my client had me order one while at the convention. I'm not sure I can remember the exact configuration but it seems to me it was 5-15x42mm T if I recall correctly. The Legends construction  eventually got to the point of being held up by the lack of having the scope in hand to bore the set of my rings to the required tube diameter. Things were getting a bit tense so I called Zeiss and asked what is the tube OD call out on this back ordered 5-15 ? was it right on the 1.000 " mark ???. Seemingly bored by the question I was told by my contact at Zeiss "Yes, it will be 1.000".

So to complete the project we bored our rings accordingly to make the client happy and prevent any further delays when the scope did arrive. Within a couple months the new Zeiss pitched up, the completed Legend came out of the safe, the top rings halves removed and scope slid into position.  Unfortunately it would not fit in our set of 1" rings. The problem ? the scope tube OD on that particular scope was 1.005. Thanks Carl.

To correct this problem required removing the bases from the rifle, shimming the gap between the ring halves set each up in the milling machine vise, indicating them in again and boring the ID of each ring out to 1.005, making up a lapping bar that was 1.005 and then lapping the rings again. The client was not at all impressed with the up-charge. My response was: "if you want to bitch, call Carl."

Now before anyone thinks I have any angst for Zeiss let me correct that notion. I have been a non-stocking Zeiss dealer for close to 30 years and I use their products in the field myself constantly. I willingly endorse and supply them for my clientele whenever requested. My issue with them is their micrometers don't seem to measure the same as my micrometers, must be that metric thing.

So now we have a small herd of Conquests on my bench that are all the same tube size but won't fit in a standard set of 1" commercial rings without marring the hell out of the scope tube before the proper eye relief is established and the reticle is rotated to be "level" (whatever that implies) with the planet. If a scope of this diameter is wedged into place it then throws the tapped lower scope rings holes out of alignment, away from the center-line of each ring with the top ring half holes and counter-bores. The rings screws are then under stress and out of alignment when snugged in place. If installed "farmer tight"  a crushed or cratered tube is a given.

The only one way out of this dilemma was to determine the approximate gap between the top and lower ring halves, as cut by Ruger in this case, make up the appropriate shim for this thickness ( in this case I chose .040) , drill two # 29 holes in each shim for the scope ring screws to clear and then did my level best to try and figure out a way to indicate and hold the ring in the vise to enlarge the ID on each ring. Putting horse shoes on a catfish might have taken less time. 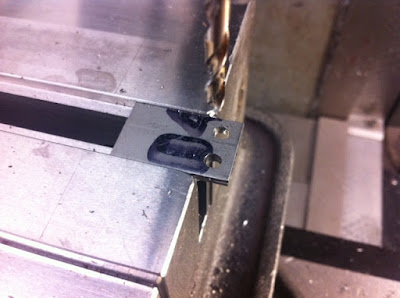 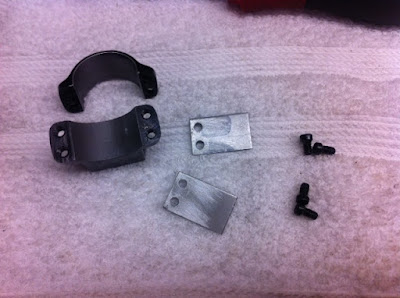 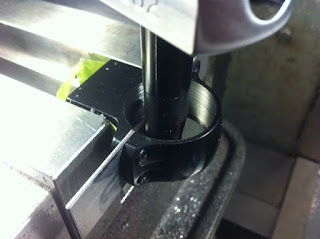 What was also interesting was that, even when using a 1.000 gauge pin to indicate this whole lash up in place and opening up the ID bore of the Ruger ring to 1.004", my final cuts did not clean up the entire surface inside the ring on either the top or bottom half of that investment cast set of rings. Go figure

Once completed, the newly-bored rings were placed back on the rifle's rib, a collimator was placed in the muzzle end of the 7x57 and then the Zeiss was settled into the rings. I did this to confirm we still had an ample adjustment range in the scope and to determine the which ring would take either the front or rear position on the rib and allow me the least amount of height misalignment to deal with when I lapped in the rings on the rib.

I made up a 1.004" lapping bar and used it get as much lapped surface area on both lower ring halves without turning this into an all day event. I quit when I had lapped approximately 85% of the surface for both rings. 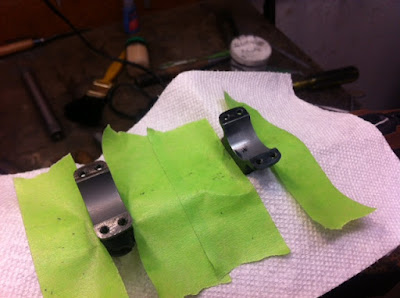 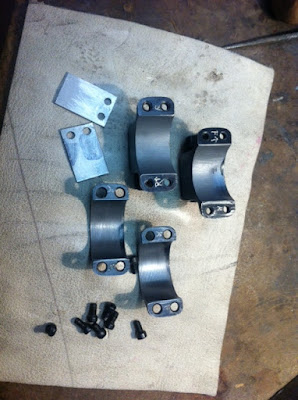 Note that areas in the original ring surfaces that did not clean up by machining the rings .004" oversized and lapping. And people wonder why are started making my own mounts.

Now all that needs to be done is to re-blue the bits and pieces and put this package back together. The estimated hour long job ended just in time for lunch. Imagine this situation being addressed at your local Hook and Bullet Emporium and we wonder why so many used scopes look as if they been used as clubs.