Recently I was asked to machine and partially replicate a Holland & Holland 98 Mauser stock. When the rifle was in my hands there were two things that really stuck out that I have yet to encounter in the past.

Chambered for 458 Winchester the H&H scope mounts had been installed with their own answer to heavy scopes moving under recoil. You simply drill through the ring bands and install set screws that bite into the scope tube.

I'm not sure if the Zeiss warranty covers this type of upgrade ? It would have been interesting and easier to have actually left the appropriate .030 gap between the upper and lower ring halves to see if that might have solved any recoil movement issue with proper ring tension. Clearly no attempt was made in this regard. Rifle making at its best. 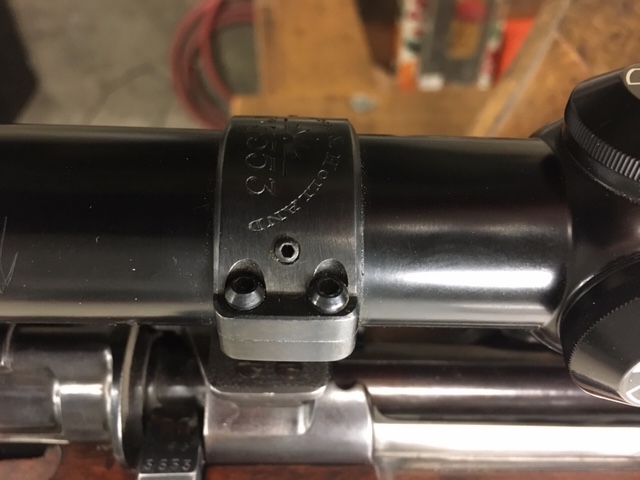 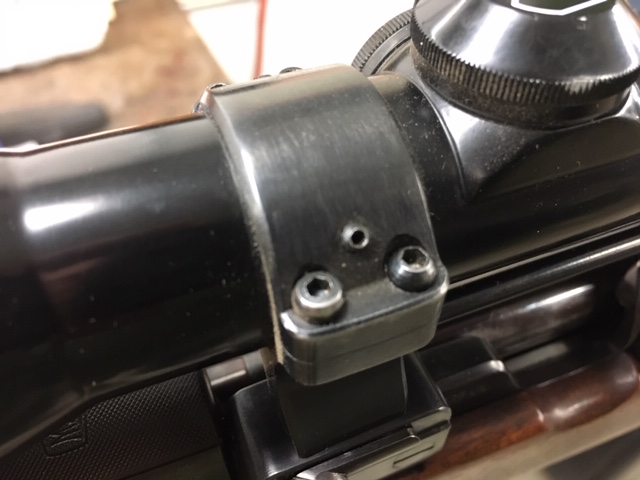 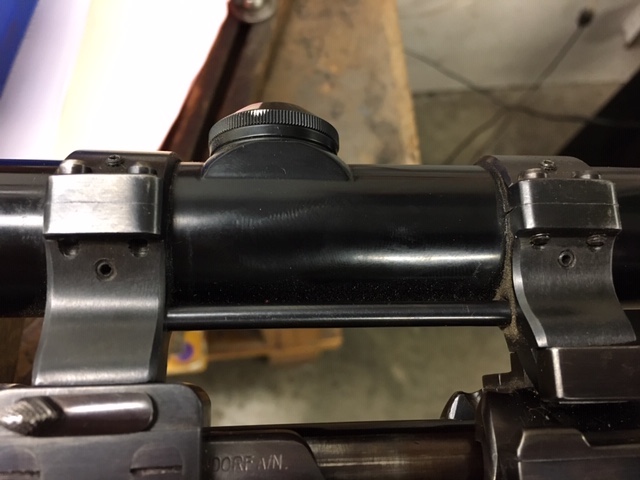 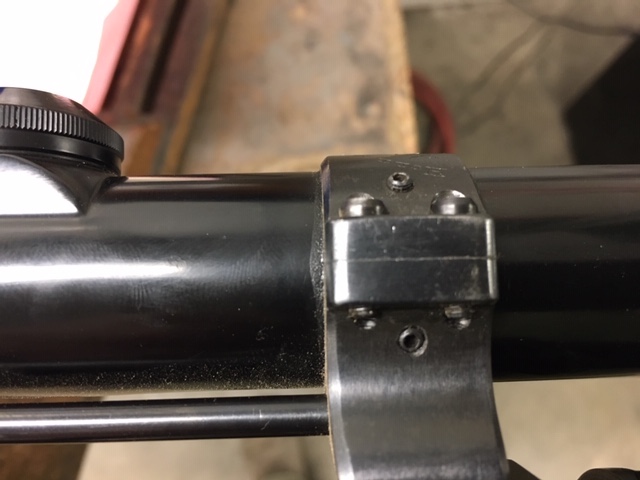 Then we have the TWIN safety arrangement. Since I do not know how the rifle originally left the factory the following is purely a guess on my part.

Clearly the rifle began life set up for iron sight use as the butt stocks drop and cast off is perfect for acquiring those sights, you throw it up and you're looking straight down the line of sight. All the parts carry the original Mauser Serial number stamps. The Mauser Wing/Flag safety would have been a perfectly serviceable set up in tandem with its original 98 trigger. You can see they engraved the SAFE into the wing. 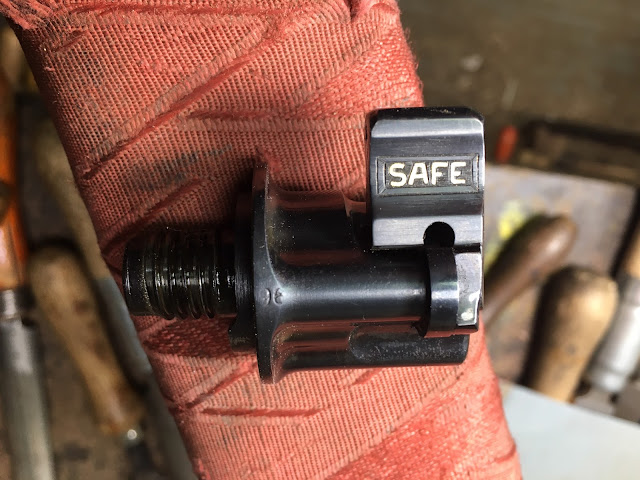 Then at some point the rifle re-entered the factory with the idea of adding the scope. Here's where things get a bit interesting.

Clearly with the scope in place this original wing safety is not going to be our best choice. It's either On or Off SAFE. Not really convenient in a tight spot. I suppose you could slip a round into the chamber and lower the firing pin carefully onto the primer as some do I'm told and then when required to shoot you'd lift the bolt to cock the rifle and you're into game, so to speak.

I would imagine your professional hunter would require physical therapy by the end of your hunt by spinning his head around trying to monitor where that muzzle was pointing every minute in the field. 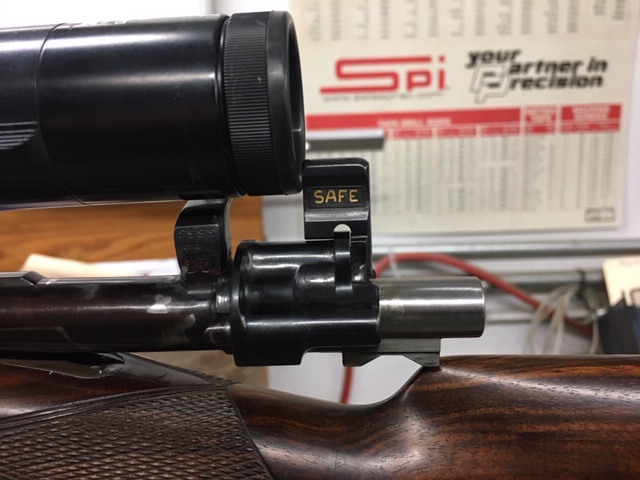 I THINK ????? the barreled action was then fit with a very nicely inletted secondary Sako style 98 Trigger with a recessed pocket for the safety button to nestle into. The inletted mortise for the Sako style trigger and the an original 98 trigger require a very similar inlet footprint so we have to assume the Sako unit was the 2nd trigger unit fit into this stock. 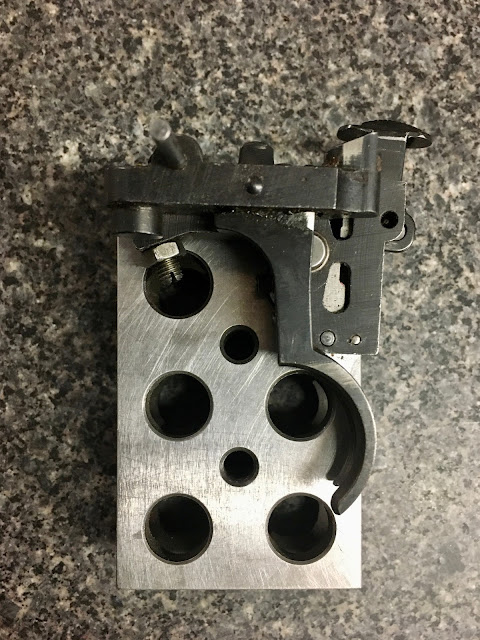 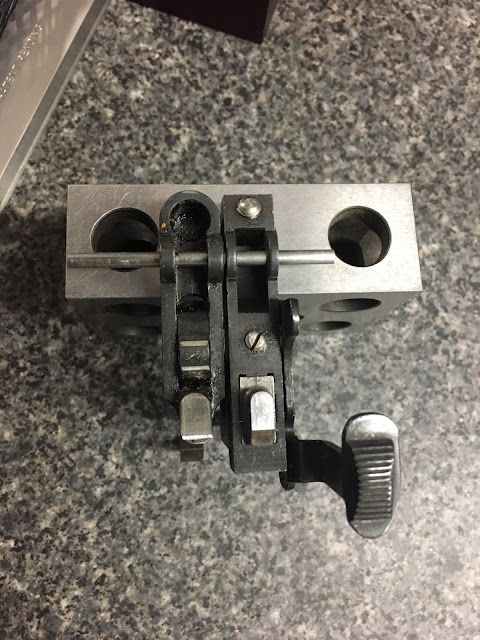 Now For some reason that is not at all clear the Sako trigger assembly was then modified in such a way to keep the safety in the FIRE position permanently, So the rearward, falling sear block would not rotate into the SAFE position on this trigger unit. I could not move it at all, it has been completely deactivated. 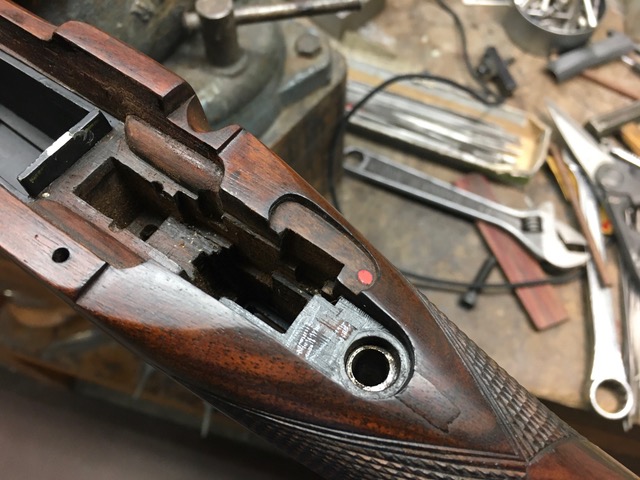 A lot of keen effort has been expelled to properly install this Sako trigger unit such as to machine and then hand file a slot through the tang to allow the bolt lock feature to operate as designed. Which then begs the question if you de-activate the SAFE position mechanically and freeze the mechanisms rearward movement so it can't move reward.

What was the goal ? 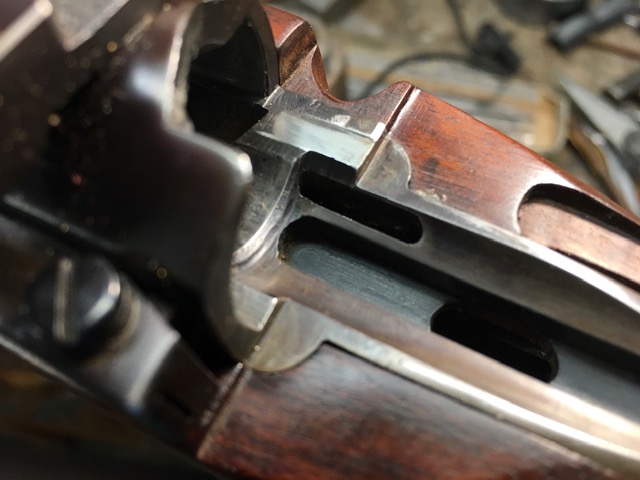 It would have been nice to install and original looking Oberndorf style bolt knob but with the proper geometry to clear the scopes ocular bell as seen so often since the early seventies. 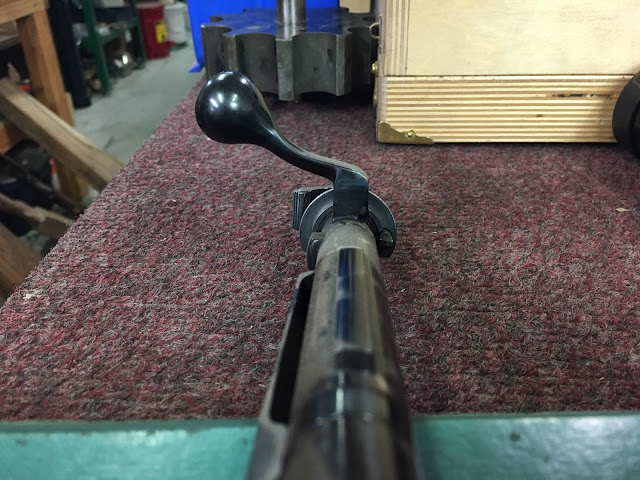 Another question is instead of removing the original wing safety altogether and perhaps plugging the cavity at the rear of the original shroud/sleeve they choose to leave the safety wing in place. If this rifle is carried in the field with the scope in place it's again either on SAFE or FIRE until you remove the scope and rotate the original wing into the desired position then replace the scope.

Did someone really signed off on this ?

As a new stock is being made to replace the original the Stock Maker requested I sort out the safety-trigger issue as we're starting with a clean slate. The rifle will now a a conventional 2 position wing safety to clear the scopes Ocular bell and a 3rd trigger installed which is a Swift Blackburn trigger unit.

Now if we could just get someone like Steve Heilmann to replace the forged bolt handle with a proper looking conversion for scope we'd be in tall cotton. These are just one guys thoughts.

Its a grand old rifle and needs to go into the field again. 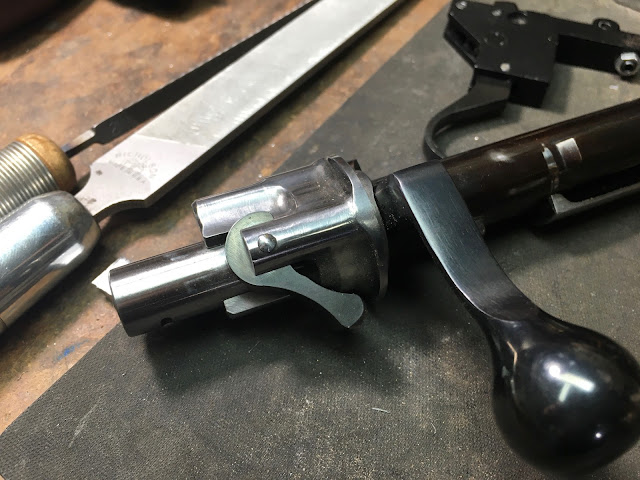