Tia Shoemaker began shooting her 416 Remington Legend before the paint on the stock really had time to fully cure. This introduction with her rifle began in the desert of Arizona right after the SCI convention and later in the wilds of her home state of Alaska. Her father Phil assembled a variety of loads for her to shoot during the spring and summer and she wasted little time in getting use to the longer bolt throw, the agronomics of the Legend stock and the shove of that lightweight 40 caliber package. Being accustomed to the recoil was nothing new to her. If you make a living guiding for Brown Bears you learn how to handle it. Throughout the summer I got a few short e-mails from scattered locations up north letting me know that the two of them were bonding.

In a cryptic e-mail in late summer Phil mentioned she was taking the 416 on a sheep hunt in the Brooks range. I chuckled, now this should be interesting I said to myself.

To some this would seem to be a pointless stunt. Not that the cartridge wouldn't be sufficient as 300gr  416 diameter bullets are available that will give you a trajectory similar to a 30/06 out to 300 yards but this rifle came outfitted with 21" barrel and a Leupold fixed 2.5 power compact scope. The scope  had no stadia wires, dots or turrets to aid in extended downrange bullet placement. Today you are almost labeled a fool if you're not properly outfitted with such optics to even hunt whitetails in the woodlots of Pennsylvania. Some would speculate that Tia was going into the rocks with a coveted permit that most sportsman would dearly love to have and was grossly hampered in the optical department with an excessively heavy cannon, Why limit yourself to such a combination?  What in the hell was she thinking ?

Having never paid attention to what the current fashion craze was regarding rifles or equipment she confirmed the zero on the 416 on last time and packed the rest of her kit. Outfitter Luke Tyrell (Tyrrelstrails.com) a close friend of the Shoemaker clan had selected the drainage to begin Tia's hunt and eased the plane into a rocky valley then settled the Cub onto the gravel. When camp was set up the two pulled binoculars and a spotting scope out of their duffel and began to systematically pick apart the country around them. No hunting allowed that day but no one said you couldn't look around. 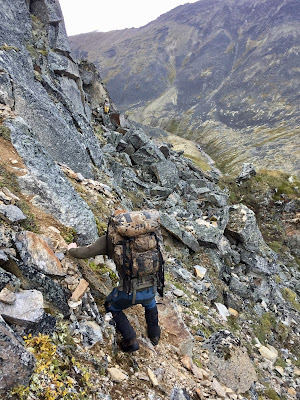 For the next few days she and Luke glassed basins and summits before finding a small band of rams with one ram that showed some promise. Using more boot leather and sweat put them closer to the small band of rams but due to weather and distance they could not confirm to their satisfaction the age and legality of the larger ram 100% that day so they backed off the ridge-line lost what altitude they'd gained and returned to camp. The rams were located again the next morning and the climb resumed. They finally determined the larger ram was indeed legal and a carefully planned stalk put Tia just under 160 yards from the sheep. Using a bolder as a rest she settled in to make the shot.  It was over before the echo from the shot faded from the basin. 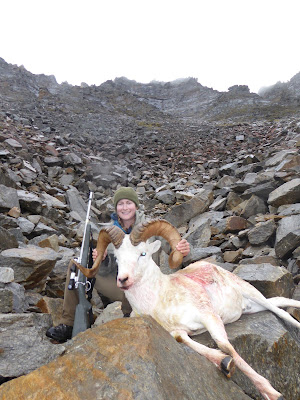 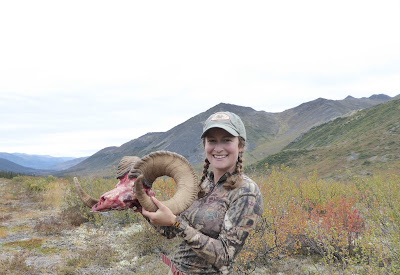 Luke's only real comment was how little blood shot meat there was maybe there's something to this ?