It's not a big secret in the trade that I do not do my own caustic bluing. Over the years I have sub-contracted this bluing out to a few very talented people. With very few exceptions I have never had any major surprises when the parts were unpacked and readied for final assembly. Some of my past connections had retired from offering this service which led me to look for new talent. Sounds simple doesn't it, go online or ask around, boom a done deal in less than a half a day.

Not hardly, not with my rifles

I began to rely on Doug and Katie Mosier the owners and operators at Glenrock Blue for my caustic bluing a number of years ago. Hands down this was one of the best business decisions I have ever made. I'm not at all a fan of baked on finishes nor do I see a need to rust blue every Classic rifle that leaves my shop. There are exceptions of course and each is addressed on its own merit but you will never find a rust blued Legend because they're aren't any nor will their be any. I have always felt that the maintenance of any firearm in and out of the field rested solely on the owners diligence and not on the composition of the steel or some shake and bake wonder finish. Durability has never been an issue if one knows what to look for in a caustic solution and its application. If the owners ever wants the rifle re-blued at some point in the future the original "look" can be  duplicated every time with little fuss or muss.

I felt the need for a road trip and also had two barreled actions as well as few other major parts for other jobs that required bluing so I made a call to Glenrock to check their production schedule. Katie said that they would be running a batch in the middle of that week then they were going on an extended fishing vacation over the 4th of July holiday. Could I get the parts to them by Wednesday to be processed so they could be blued and returned shipped by Friday ?

A quick check on the Mac showed Glenrock Wyoming only 405  miles away, I've driven that far for a cup of coffee. That was all the excuse I needed to make the drive over myself. I'd be going through some of the nicest antelope country in Wyoming, the weather forecast looked prime and the parts were all wrapped for travel. I called them back and said I could be at their shop in person on Wednesday, Thursday or Friday at 9am whichever day worked best for them if they didn't mind the intrusion. All Katie said was "we'll see on Friday at 9am". 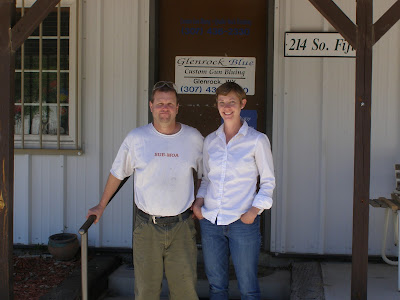 I pulled up to the front door on time, knocked on the door and met the team of two. Once inside I have to save that I was impressed with the cleanliness, layout and organization. Note to self: never invite these two over to my shop without at least 2 weeks notice.

Their operation was nicely compartmentalized with a cleanly organized office, more than adequate room and tools for any dis-assembly and re-assembly of any firearm when required, a separate well organized inspection, wrapping and shipping area that was commanded by Katie alone. I was evident she had this facet of the business wired to a science. 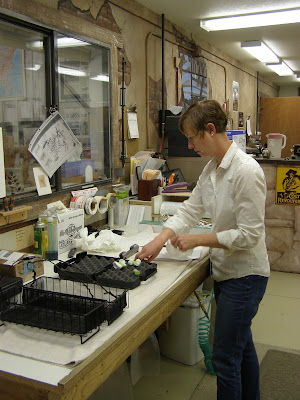 The actual bluing room was well lit and very well ventilated. Separate from the all the other space was their polishing room which was professionally equipped. There is a dedicated area for the application of Cerakote as well, a controlled humidity damp box and space solely dedicated to rust bluing. I didn't see any Nitride ovens but who knows what's in store for the future.

I sense some of you wanting to sneer at the Baldor buffing wheels but you need to remember that not everyone wants a 100% completely hand polished firearm before it hits the tanks. Metal polishing is a disciplined art-form whether its done by hand or with hard felt, muslin, canvas or tampico wheels. Even bead or sand blasting steel to given surface finish requires thought and technique. It is not a wham-bam thank you ma'am affair if done right and never has been.

There are course's for horse's and the level of metal prep should depend on the intrinsic value, real or perceived and the current condition of the firearm and the amount of time i. e. money you wish to invest in labor to bring it back into to pristine condition or to finish out a newly assembled project. Where all this rattling on is going is to say Glenrock is capable of handling about anything you can toss at them within reason depending on your budget. You want hand polishing and rust bluing, you got it but be prepared to pay for the skill level required to do so. 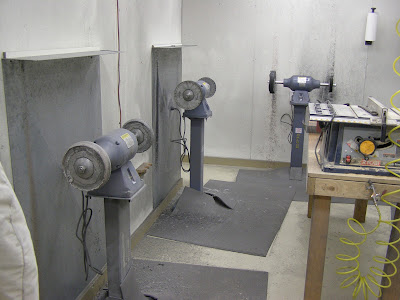 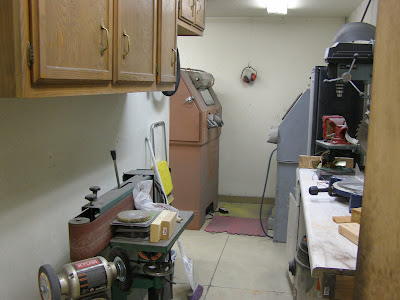 I arrived just as the tanks were coming to temperature. Everything was unpacked placed in dedicated baskets and racks and the cycle was begun. First by degreasing all the parts and then placing the those parts into the caustic salt bath. 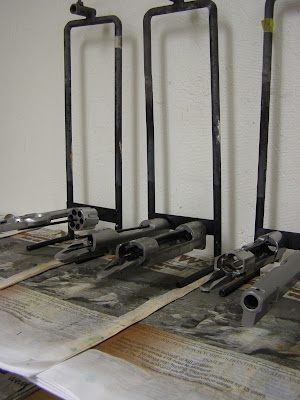 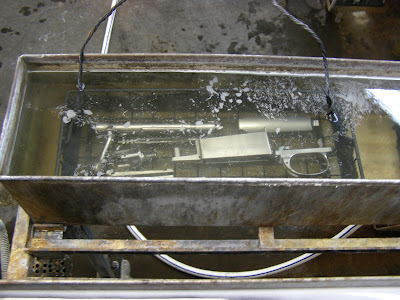 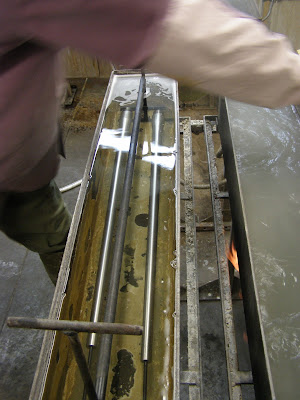 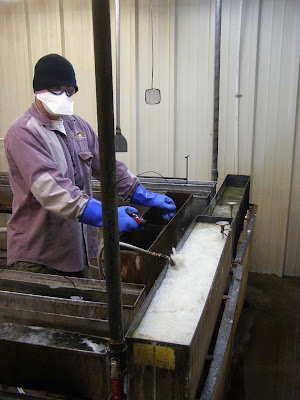 Doug regulated the temperature of the salts, and pulled the racks in and out of the bath to monitor the progress as the parts went through the color transformation. If you're averse to sweat and have never felt comfortable working in a tropical environment this occupation may not be in your future . The long sleeve shirt, gloves, mask and associated kit are not for show trust me. Once the procedure was complete all the parts were oiled down, wiped off and the barrels patched to remove any residue from inside the bore. Watching Doug work could best be described as very damn efficient. 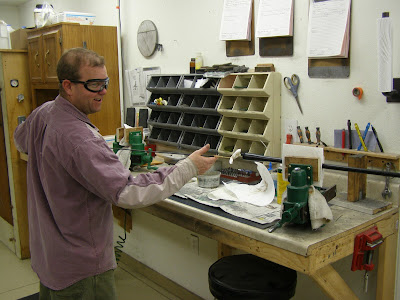 Doug gave the finished parts the visual once over then they were transferred to Katie's bench where she really looked them over one by one. If something doesn't look up to snuff she gets Doug's attention. At this stage they may re-run the part, shocking it in cold water rinse to get the part to behave as well as raising the salt bath temperature to try and bring that part to color so as to match the rest of the parts for that gun. When all else fails the customer is called to consult and determine what steps might be taken. I know as I've gotten these phone calls a few times.

When all is good with every part Katie reapplies light oil to each part and then wraps each part in plastic cling wrap before wrapping yet them again in paper towel and masking tape to prevent the parts from rubbing against one another in transit. Quality control and care at it finest. 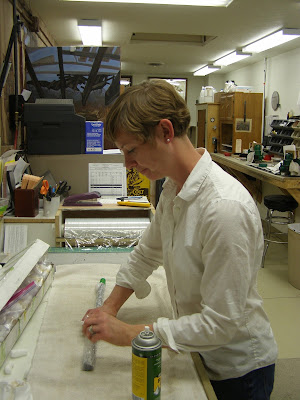 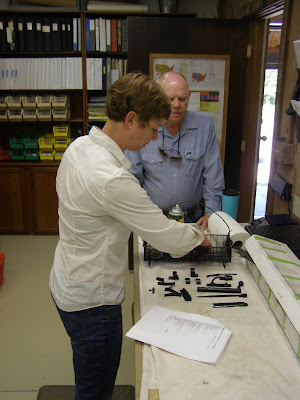 With my parts wrapped and ready for the trip back though the Rattlesnake Hills and Martins Cove we called a stop for lunch and we all foundered on a couple of local burgers. It was now time to point the Prius into the wind and head for home. 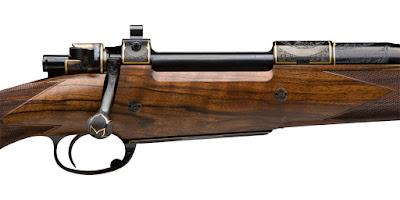 My thanks to both Katie and Doug for my intrusion into their work day and for once again leaving me with the feeling that the American Craftsmen and Craftswomen are still alive and kicking. The Mosier's can be reached during regular business hours at contact info below, unless the trout are really biting than its any ones guess.