You Just Never Know What Will Walk In The Door


I am occasionally asked to machine a set of grips for some rather ornate Handguns. A while ago I took the time to make a couple of additional fixtures to allow me a bit more versatility when called upon to do so. Making the fixtures took considerably more time to fabricate then to machine any actual pair of grip scales but the sweat equity was worth the up front investment. This pair of fixtures was used initially to machine a set of grips for a highly engraved Luger Parabellum. They allowed me to machine the raised inletting bosses on the underside of the Lugers grip panels for the 1st operation. Then allowed me to rotate the grip scales 180 degrees, index each scale back onto the fixture and then contour the exterior sides. On that particular project the scales exterior surface thickness was left  oversized to allow them to be carved per the clients request.

Recently another highly engraved Colt 1911 required a set of grips to be machined and the same fixture was pulled out of a drawer and dusted off. As the underside of the 1911 scales fit flush against the frame each scale was set up in the mill, machined smooth with an end mill then the screws holes were precisely located and drilled. Each scale was then rotated 180 degrees and each screw hole precisely relocated with gauge pins then counterbored for the screw heads. Low Head Allen screws were machined to mimic the original 1911 grip screws and then each scale was securely screwed to the fixture. Only then was the exterior profile and contour machined. 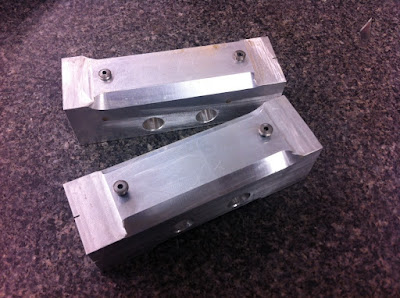 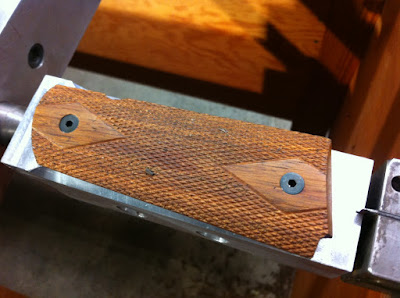 This 1911 had been expertly surface ground, detailed and polished by the Chad Tarbet and Brad Green at Intermountain Gunsmithing LLC. Once the metalwork was completed it was then completely engraved by Lee Griffiths. As Lee owns the 1911 he chose a World War 1 theme for the scenes. It is a damn shame I have no quality close ups of the scenes at this time as they are excellent.

This set of scales was machined from a very hard block of Turkish Walnut that Lee had squirreled away. It was thick enough for me to split in half to give the pair a "Book Match" look. I had considered using a block of Ebony in the same manner but the Turkish won the coin toss. The scales now finished have been left un-checkered to allow a prospective buyer the options of having them checkered, carved by Lee or remain as is. 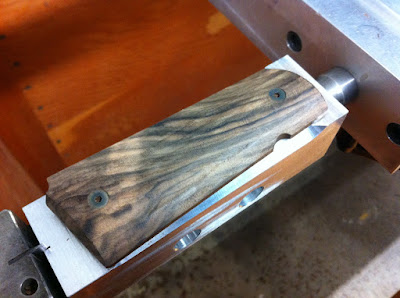 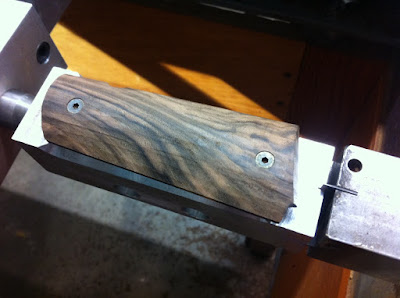 Doug Turnbull's crew Carbonia Blued the majority of the finely polished parts after Lee had completed the engraving. The gold plating sets off a nice contrast with the French Grey, Carbonia blue and Walnut back drop. Then Intermountain was called to back into the game to refit and reassembled the 1911 without doing any cosmetic damage to the finished surfaces. I have it on good account that all the cell phones were turned off and Brad chose an Easy Listening radio station for the remainder of the assembly time. 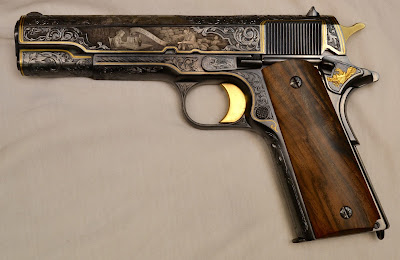 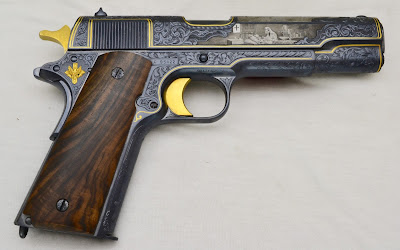 The final result is eye catching to say the least and speaks volumes about the time and effort by bevy of craftsmen doing their best to achieve a desired goal.