More Pics From The Field

It is Thanksgiving Day and the sun is shinning in Northern Utah. We have a light skiff of snow in the yard and for the 1st time this fall and the temps have finally dropped. One of our Spring Gobblers is in the oven and I can already predict the results. By early evening we should all be in gravy induced daze.

Here are some more recent pics from the field. Many have had a pretty productive fall so far.

Terry drew a coveted tag to hunt on the Eastern plains of Colorado for deer. The tag allows you to take either a Mule Deer or a Whitetail. Terry's plan was to try and kill one of the oversized Mule Deer that live amongst the many corn and alfalfa pivots that break up the short grass sand hills and arroyos. At the end of the 5th day plenty of bucks had been seen but nothing found really pushed the envelope. It wasn't for lack of effort, they just hadn't run into a stud. The Outfitter suggested Terry extend the hunt a few more days and the search continued. Late in the afternoon on the 7th day the team ran into this mature Whitetail tending a doe and the 300 H&H was quickly put into action, a single round closed the deal. 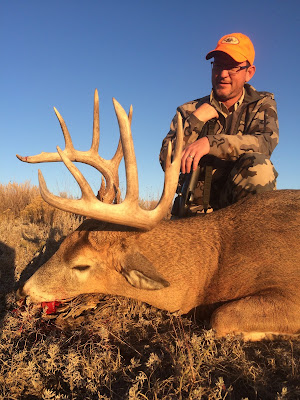 This is Terry's largest Whitetail to date and fine buck it is.

Craig and his son Will drew two Elk tags in their home state of Arizona and set about to make the most of the opportunity. Each has a battery of rifles to choose from but the hammer of choice for this hunt was a Legend 270 Winchester that has been used in Canada and Missouri with now predictable effects pushing a 140gr TTSX it has been lethal to say the least.

I'm not sure if the two of them draw straws to hunt with the same rifle. Does one take a morning shift the other afternoon shift ? or if they alternated days ? but there seems be be a division of possession that works and everybody is happy. Another Legend is currently in the works so when completed they no longer will have to share the same rifle on every other Thursday and or alternate Leap years. 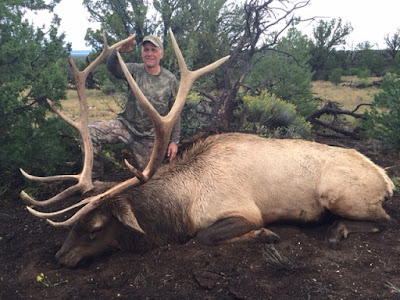 Craig's bull was shot head-on and very close range and the TTSX drilled through the brisket and up- ended the bull right there. Ross Seyfried once said the Winchester 140gr Failsafe turned the 270 Winchester into a true Elk cartridge. While the Failsafe is now a thing of the past the TTSX may be with us for many Elk seasons to come. A smart man would lay in a case or two of his favorite weight and caliber.

The both Craig and Will are now in Missouri hunting Whitetails and I can only imagine who is carrying that Legend at this very moment ??? 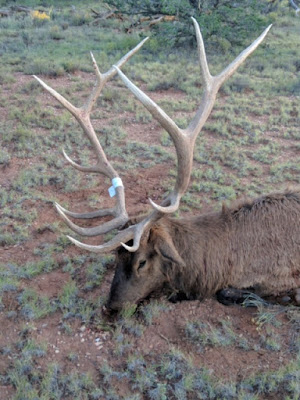 Both Karl and John drew deer tags Oregon this fall and rolled out their Legends in hopes of having to use them. For a number of year these two compadre's would go to Namibia on cull hunts as they wanted the trigger time more than worrying about the size of the horns. All the meat is marketed professionally and they were more than willing to bring the ammo, lots of ammo. Needless to say they now have a lot of experience under their belts and have become more than passable shots. The bucks below are the results of that hunt. John dropped this 10 plus year old 2 point with his 7mm Remington and Karl killed this mature 4x4 buck with his 300 Winchester. 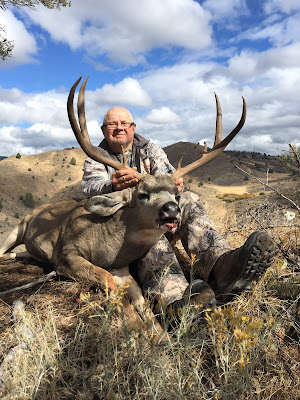 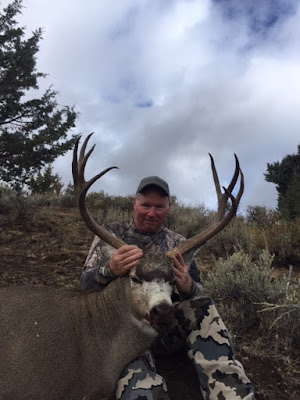 Lexi spent less time at the range this summer and most of her time being employed as a life guard. So as the Utah deer season crept up on us it became apparent that some after school range time was imperative and had to happen quickly.

With the season just around the corner her point of impact was confirmed from sitting and prone rather than off the Hart rest and within a a few afternoons she was back in the groove keeping all her bullets in a 5" group out to 300 yards. She had drawn a General Season Deer tag in the northwest corner of Utah but I was not at all familiar with where we ought to start. The scouting that I would have normally done was put on hold while I moved my 83 year old mother from Virginia to Utah. I called a number of friends that had hunted Box Elder County in the past and all had some good ideas to pass on.

I am now becoming much more familiar with App functions that allow you to determine land ownership in the field and this was proving to be a real asset this fall. We finally got permission to hunt a large ranch and spent a couple days behind a spotting scope at dawn and dusk trying to determine how to best hunt the first weekend of the season. 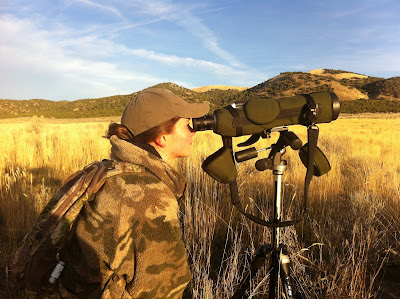 A group of Bucks could be seen on the neighbors alfalfa pivots but so far we only turned up a small buck and some Elk where we had permission. Opening day found us climbing a ridge line and carefully glassing the country around us. We found the Elk again but never sighted any Deer. We did however find a canyon trail that a large buck has been using for some time that I think held some promise. We found a place to set up and wait the buck out just at dusk as he dropped into the base of the hills to feed. While we hadn't seem him it was the only game in town that had any merit and the place as well as the plan seemed to have potential. 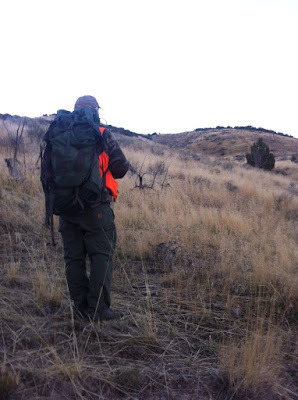 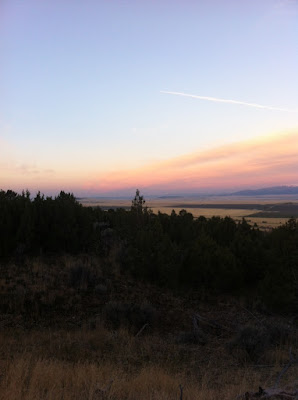 As luck would have it at noon we had to drive to another ranch in the same area so Lexi could pitch a proposal for a science project she had in mind to the land owner that would require a healthy amount of real-estate to gather any useful data. We rolled into the ranch yard to find it filled with family and friends, some out for the deer hunt, some there for the meal to come and others deeply involved in a very serious looking game of poker. I knew many of these participants and walked over to the barbecue grill knowing it was a lot safer than being anywhere near that poker table. Lexi made her pitch, was granted the access and as we were about that leave the owner and his son said " why don't you all drive down to that guzzler on the upper bench and look for a 4 point that's been hanging out there for weeks". I like trick questions just as much as anyone and asked "why isn't anyone else here hunting him ??" the owner replied "Card games to important to worry about that buck right now, you'll go ahead" so with that we saddled up.

This patch of ground is often where I hunt Chukar's and Hun's and I've seen plenty of deer on it over the years. I stopped the truck 600 yards from the guzzler and began to look for bedded deer, within moments I spotted the very buck snoozing under a tall bunch of sage. He was not alone, in short order I spotted 3 other bucks and a number of does. I got out the Big Eye and had Lexi look through the spotting scope" What do think ?" the smile was all I needed to see, it was game on. 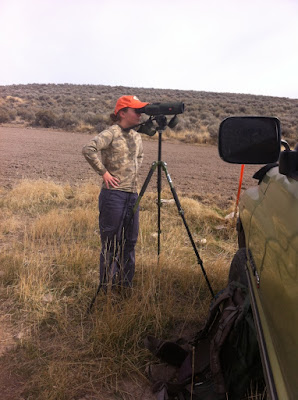 There was no way to put a sneak on that buck from our current position. So we drove out of sight, parked, then Lexi, my wife and I sorted out what little gear we needed to attempt a stalk. We got above the bedded deer and slowly made our way in their direction up slope and into the wind. It was then we ran into another dozen deer that had just gone to water. One old doe knew all was not good in Camelot but just couldn't put all the pieces together well enough to start a rapid retreat to safer pastures. I was afraid she'd bolt down the draw and blow up all the other deer around the buck we were after.

Instead she watched and waited before making move. We were patiently doing the very same thing 300 yards away in some head high sage. At the end of 20 minutes she elected to leave the draw going way from the other bedded deer, the rest of the herd followed her over the ridge. The stalk continued but now the wind was really beginning to swirl. Three times it hit the back of our necks and I thought we were busted, but when its 4th and goal you just don't hand over the ball and walk off the field.

Now we were on our hands and knees then finally our bellies. I could see other bedded deer below us and eventually spotted the buck still snoozing under the same sage. The range was 200 yards and we were now out of cover.  Lexi found the buck in the binocs and decided to slowly scoot uphill on her rear end until she had a clear view and an unobstructed shooting lane. I pulled the shooting sticks out of my pack, extended the legs and handed them uphill. She was as calm and deliberate as ever as she slid the fore-end into the yoke. She then asked for a little more elevation on one leg and settled into the rest. When she was ready I said "wait until he stands and then place the duplex right where you want the bullet to go, this could take awhile".

Ten seconds later the buck rose to his feet and stretched. I heard the safe safety go off then as an after thought said "don't forget to breath". Seconds late the rifle cracked and the solid thump of a bullet strike rolled through the draw. The buck took a few feeble steps in a half circle and settled back into the sage one last time. The ping of the spent round let me know her situation awareness has improved and we rose to our feet. Lexi did a bee-line for the buck. I motioned to my ever patient wife that she could now come forward. She unfortunately hadn't been able to watch this all unfold as she stayed 50 yards behind us on the final crawl. The buck was a typical 3 year old and for some time the three of us just soaked it all in. We took some pictures and Lexi and I finally went to work on the buck while Rebecca went to get the truck at least closer than it was. 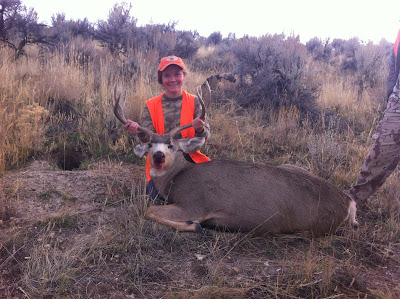 The 120gr TTSX entered and exited the ribcage shredding the contents. Over the years I have been most impressed in this bullet when used in the 260 Remington, 6.5 Asp and the 6.5-06. So far, at least to 350 yards it is a stellar killer. Soon the field dressing was complete and the truck could be seen lumbering into view. We cut away the liver noting there was no saving the heart as it had been turned to giblets. 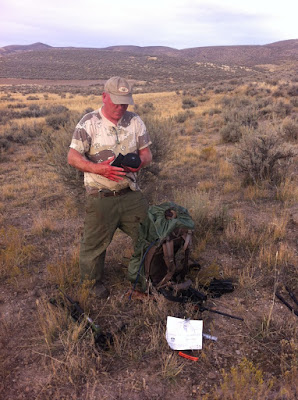 The buck was very fat having been feeding on Reeds wheat for most of his life and as it was weeks before the rut and I had an idea that the version would be excellent. It had been a grand day on the hill. As we pointed the nose of Kermit in the direction of home I asked Lexi if she had learned anything today? a tired voice from the back of the cab said " yes I have, when's the next poker game ? "