When you ride into a camp late at night with any ram it tends to make folks walk up and take notice. Usually when I have ridden in late it was because we got turned around, buried a horse in a bog our had a rodeo right at sundown. Craig however was coming into camp, hungry, happy and bone tired. It had been quite a day. Reg saw the rams horns cinched in the rigging as he walked over to the tired string. Smiles break out, hands are shook, hats pushed back and a story is born. The emotions and camaraderie in a gathering of hunters fresh off the hill has been sadly suppressed by much of our modern world. 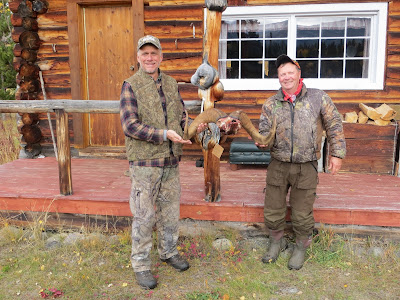 You can be too tired to eat. When you finally sit on your bunk and begin the process of stripping off the layers of wool, pile and polypropylene it almost becomes work just getting into a sleeping bag. Once in the bag your body triggers a complete reactor shut down. It is mid morning before you know it. Hot coffee and flap jacks help smooth out the wrinkles of aching muscles. 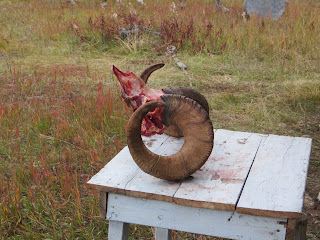 You walk over to the rams horns for the third time since you rolled out of the sack, hold them once again, feel the weight of them. You lift up the cape and press your face into the salt and pepper hair and breath deep. You do this a couple times as you know this moment only happens a few times in you're hunting career if your fortunate. You finish that 4th cup of coffee all the while talking about the rain, the stalk, the ride out, remembering yet another detail. There is no hurry to go anywhere today. The team stays in camp today and it is a happy camp. 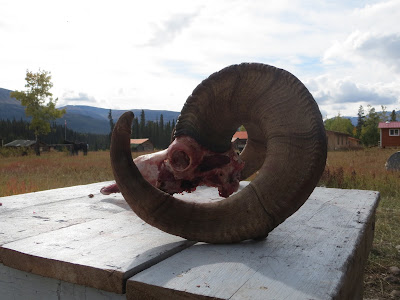 Craig now has almost a week to look for Moose. But like the rams they have yet to see a Moose. For the next two days the Moose hunt draws a blank. The team rides into one valley after another, glass until their eyes bleed but have not picked up the flash of white paddles anywhere. On the afternoon of the third day the packer spots a bull a mile and a half across a valley. Soon two cows are spotted and the bull finally steps into the open. The guide is none committal about judging the bull from that distance, a smart move for an experienced guide. Craig however had seen all he's needed to see. A plan is made, a route chosen and they saddled up. When they get above where the Moose should have been they begin to optically pick the timber apart trying to locate the group of Moose. Soon the cows are spotted and then bull walks into an opening 175 yards down the slope. A quick horn assessment is made and Craig decides to shoot, it's now or never.  Craig wraps up in the sling and sends the first round towards the bulls shoulder.

The bull continues following the cows while Craig tries his best to place a bullet between Spruce limbs and pucker brush whenever he sees an opportunity. The bull stops for just a second in another opening and Craig fires his fifth round. This shot registers a definite reaction but again the bull continues into the heavy cover. The rifle is now empty and there isn't a Moose in sight.

Feeling at least some of his shots were accurately placed Craig gets to his feet and reloads the magazine. The walk down the slope reveals a Moose-less landscape, the guys spread out. For the next 40 minutes they look where they feel the bull should be. No blood is found, had they misjudged the range? The location? Had there ever even been a bull walking through this tangle of brush? The packer had filmed the event on his camera phone so they dig out the phone and review the footage. Sure enough there had been a Moose, it stumbled after the last round was fired, it was standing by that one big Spruce that was ? Crap !!!!! further up the slope than they had been looking. They converged on that tree and there lays the bull. It had expired after taking a few more steps. His Legend has claimed another victim. 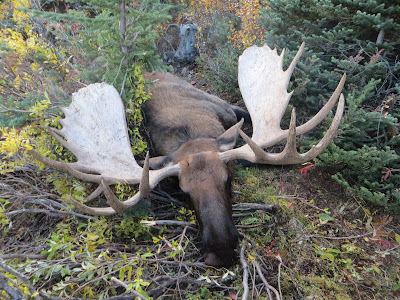 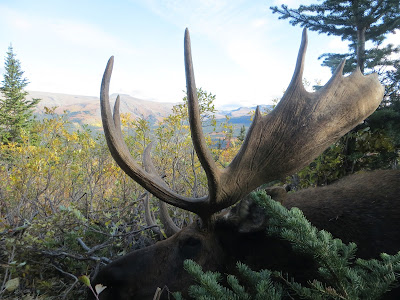 Craig has shot a few big Moose in the past and this Canadian version was grand in every respect. You never really appreciate the size of any Moose until you really walk up to one and this bull was no exception. With a spread of 62", wide palms and outstanding fronts this bull was another dream realized. They sat down for a while to process it all. Laying before them was another testament to persistence. After a while they cleared away some brush for photographs and then noting the time began the chore of breaking down the 1600 pound bull. If you have ever engaged in this process you know damn well that it is not a 30 minute job. As the guide capes the bull the packer and Craig began to skin and quarter the carcass. Eventually the saddles are re-cinched and the panniers loaded while each horse protest in their own individual way with the newly added weight.

The packer is in complete control of this task. You do what you're asked, when you're asked and then stay out of the way. Transporting this kind of load is an art form that is learned from the school of very hard knocks. At last they are ready to travel, police up the site leaving the remains for a wandering Grizzly. Satisfied they head for camp. 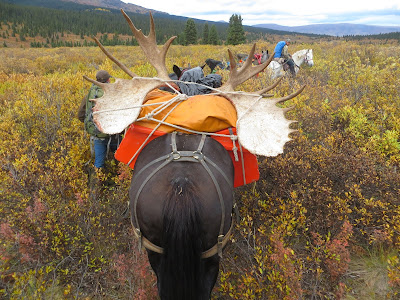 Craig rides behind the horse carrying the horns and is amazed as the antlers just slice through the timber and brush as they covered ground for the next 5 hours. Bending green tree limbs out of the way and breaking off any dead timber that doesn't yield. Eventually they ride into base camp. Reg is there to meet them. "Wow, nice bull" he comments, the guide is still non committal on the size of the bulls horns. " Really a nice bull, guys" Reg exclaimed . They unloaded the horses, stow their gear for one more night and finally walk into the main lodge for dinner. Craig is still trying to suck it all in. On the long ride out he had a lot of time to recall the events of the last 17 days. While game has been hard to locate the plan to allow enough time and put in the effort has paid off. His gear was correct and had held out the elements, optics perfect and his Legend delivered when called upon. Sleep came like a freight train that night. There was no reveille call at dawn, the crew slept in. 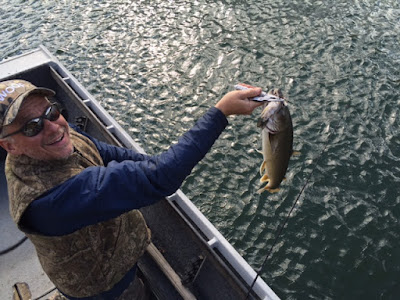 Now with a few days left Craig wanted to fish, forget Grizzlies, Goats and Caribou the thought of sitting on a seat that wasn't rocking from side to side while grunting and farting up the trail sounded  like Heaven. Reg knew just the spot and soon is able to conjure some bomber Bull Trout. Any trout that comes into the boat between 24 "and 32" and weighs 12 pounds on average gets my respect no matter where you are.

I'd say that Craig had a hunt of a lifetime in a wilderness that is still vast, pristine and rugged. One goes into these trips with hopes and expectations yet often the cards are not in your favor no matter the effort expended or the quality of the outfit and the guides, It's hunting plain and simple, there are no guarantee's. This trip was one of sweat, effort and some hunting luck. Well, done Craig, Reg and the entire crew of Collinwood Bros.

Hunt information can be found at hunt@collingwoodbros.com