Craig is not new to hunting sheep and knows all to well the challenge of having to endure weeks of rain and snow born on glaciers blown in from the Arctic. His first 10 day Dall sheep hunt was shut out by weather. Above the Canadian border you just can't bank on weeks of fair weather and old rams anywhere are never plentiful. You need time to give a hunt like this justice. His philosophy since that first hunt is to always hedge your bets.

While prospecting for a Stone Sheep hunt Craig had contacted Reg Collingwood of Collingwood Brothers Outfitters (hunt@collingwoodbros.com) He liked what he heard and requested to hunt 21 days if that was at all possible? Mr Collingwood complied, 21 days it was. Then the years slowly began to tick by. 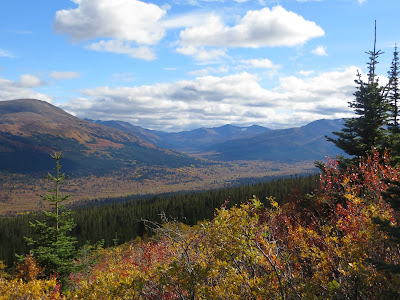 Shortly after the hunt was a booked I got a call from Craig requesting information on a Legend, time to build, cost, weight and potential accuracy ? He didn't want a 6 pound 300 WSM or 11 pound Ultra Mag. The conversation wasn't 10 minutes old and I already felt a connection. He wanted either a standard 270 Winchester or a 30-06, that choice was really left to me. He didn't like to shoot beyond 350 yards, preferring to rely on hunting skill to get inside that self imposed boundary. He wanted the rifle to weigh scoped and loaded around 8-3/4 pounds. He wanted it to shoot well enough to land three bullets inside a cantaloupe at 300 yards if he did his part. He asked me if this was at all reasonable ? I said yes, perfectly reasonable.

The rifle was finished in early summer. Craig called a few times while shooting the rifle in Arizona's 118 degree temperatures to keep me posted on his progress. He like the Legends balance, its weight and the accuracy. He could indeed hit small fruit at 300 yards while shooting prone over his back pack. He spent a lot time with the rifle at the range and quickly determined where the 140 grain TSX's would land at 350 yards with a 200 yard zero. The installed Schmidt & Bender Summit had no dots, no stadia wires, no dials to adjust, just a simple duplex reticle. The Summit was adjusted to 6 power and left alone, if he had to thread the needle he could always crank up the power. After confirming the accuracy of the load I had developed he never fired another shot from the bench as his sling, his day pack and the dirt became his rest of choice. Time became short and he finally headed north. 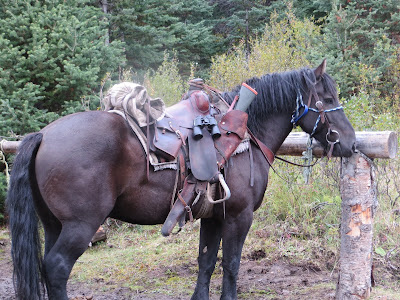 The Spatsizi Mountains of British Columbia are damp on the driest of days. When he arrived in camp the weather set in and the temperatures dropped. An early winter front came knocking, testing the camps, guides, horses and Craig. The Legend went into a scabbard everyday despite the rain, sleet and snow. He diligently wiped the rifle down every night to the amusement of the guide and packer. Water, pine needles and leaves fell or poured out of the magazine box and barrel channel more than once as he cleaned off the rifle at the end of each day. Maintenance in the field is the key, it isn't going to clean itself. 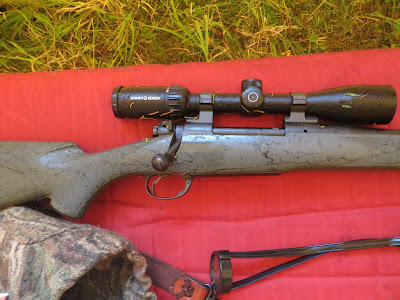 For 11 days the rain, sleet and snow didn't let up. They rode and glassed everyday they could, hunted hard but so far had not found any legal rams. Most modern day sheep hunts would be coming to an end by this time, Craig had seen this movie before. They changed drainage's, changed camps and kept grinding it out. A decision was made to fly into and entirely new area but weather prevented a transfer that day. Grounded the team decided to ride up into a valley right out of the main base camp and spend that day at least in the field as they awaited for better flying conditions. A big ram had been seen in this drainage the previous year so going on last years memory they rode into the hills looking for a ghost.

Three hours in the saddle had them breaking out above the timberline just below the lip of huge grass covered mountain top plateau. As they dismounted, looking for a place to stretch and eat lunch, they caught a glimpse of three feeding rams less than 200 yards away. There was a mad scramble to ease the horses out of sight, gather up the rifle, optics and then relocate the group of sheep. They weren't sure if the rams had even seen the horses. On hands and knees they crawled forward to a small rise to see all three rams looking in their direction, above them and now 400 yards away. The Rams didn't appear alarmed and one ram was visually much larger than the other two. They felt they could cut the distance by backing up and once out of sight, cutting to the left while staying under the ridge line. They made this play and the maneuver cut the distance to 330 yards. This was day 13 in the field and all the pieces were finally falling into place. 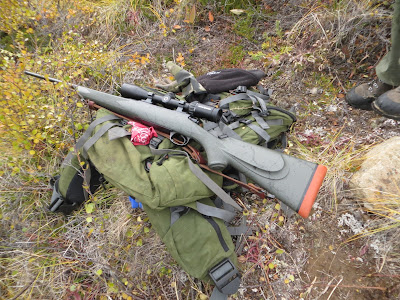 The rams bedded down and not wanting to risk a marginal shot the team bedded down as well. Craig eased into a solid shooting position, clearing away ground litter and placing the guides back pack into a notch to give him the best possible support for a solid prone position. For the next two hours they quietly debated the legality of the largest and darkest ram. The body angle of this bedded ram made it difficult to confirm 8 annular rings or if the horn tips broke over the bridge of the nose. The stage was now set so Craig lay in his hide and waited. A light rain continued to fall, the ground grew cold, muscles began to ache but no one moved. Two hours later all three rams rose to their feet. The largest darker ram now turned his head from side to side, it was obvious his horns met all the requirements for being a mature legal ram and then some. All the practice in the Arizona heat and his confidence in his Legend was about to pay off. Having dry fired on the bedded ram for 2 hours his breathing was calm and collected, he slid the safety forward, settled the reticle on a predetermined spot and slowly took up slack in the trigger. 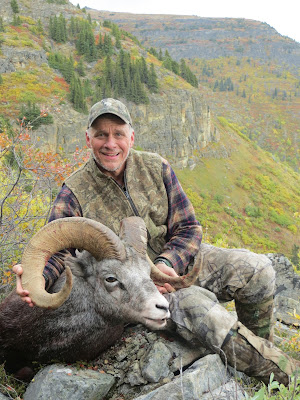 Dead on his feet the ram reared up on his hind legs, took two steps backward then fell 60 feet off a ledge and out of sight. There was no doubt he had centered the ram at his point of aim, the guide muttered "nice shot, I think ?". Craig slowly got to his feet, cramped from the protracted prone position ejected and pocketed the spent case. The words "that really was a nice shot" seemed to keep coming from out of a fog. The reality of the moment was finally settling in and his hands began to tremble. They gathered up their kit and planned a route across the canyon to where they thought the ram had fallen. Forty minutes later and safely across the divide they found the ram where he'd come to rest. Respect was quietly given as they ran their hands over the charcoal colored hair, smiles broke out, the light rain was forgotten. 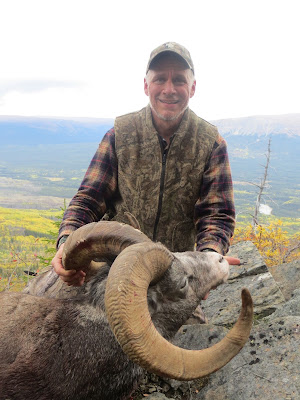 The ram appeared to be in great physical condition, its coat dark, so typical of his clan. The annual rings placed him at 10 1/2 years old. The bullet had been placed perfectly, a testament to all those hours of practice. Pictures were taken and finally the ram was carefully quartered and caped for the long ride back to the main camp. 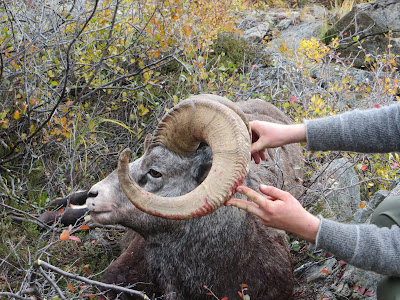 If you're a passionate wilderness hunter you never forget an afternoon like this. You carry it with you to remember when walking in this country is no longer physically possible. You accept the weather as it comes. Except the hours in the saddle and lung burning climbs up yet another ridge in hopes of seeing into the next basin and then beyond. Sometimes it all comes together. Now Craig had eight days to look for a Moose and irritate a Bull Trout if he wanted. The ride down valley didn't seem quite as long that evening.