Hunting Mozambique with Hunters and Guides

Tony and John Oosthuizen began hunting together in 1984. Tony's first Safari was arranged and conducted in the South Africa's Londolozi Reserve for Buffalo and since then they have shared campfires for many multiple Safari's in Botswana, Zambia, Tanzania and Zimbabwe. The duo has just returned from Mozambique completing yet another trip.

This hunt was planned once again to look for Buffalo and to hopefully entice another Leopard into a tree. There would be the usual Plains Game to hunt, new country to be seen and effort to be applied but that is why you go, at least that is why Tony goes. I had put together a Classic 505 Gibbs for Tony a number years ago and he has put that rifle to good use ever since. This trip would be another reason to carry the Iron Sighted Gibbs and make getting close to a Buffalo Bull the challenge. John and Tony spent a lot of time crouched behind trees and termite mounds then on their hands and knees before finally getting into a position 40 yards from of a small group of bedded Bulls. A bit of time passed before the largest of them stood up and offered Tony the perfect shot, the 525gr TSX did not fail to deliver. The Gibbs is now showing the patina of prolonged time in the bush doing exactly what it was designed to do. 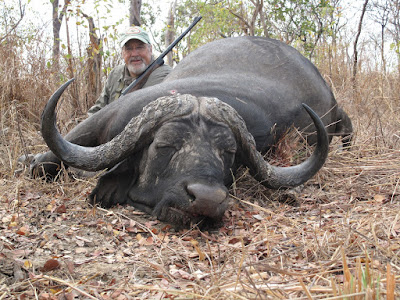 Throughout the Safari other game was taken with a Legend chambered for 340 Weatherby Magnum. This Legend has become an all purpose rifle for many of Tony's hunts here in the states and abroad. I find it gratifying that my rifles have played a pivotal part in all but one of Tony's Safaris. For 31 years this pair of Boy Scouts have shared the ups and downs of spoiled stalks, early rains, burning sun and sweet success. While Mr spots eluded the hunters on this Safari it wasn't for a lack initiative, yet another reason for planning the next trip. 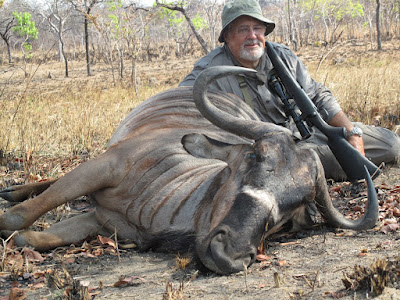 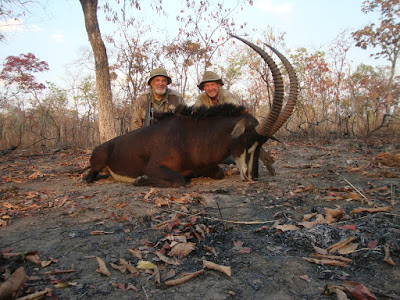 John's vast skill and experience as a veteran PH came through once again in an unrelenting effort to give each and every client the best of his ability no matter where the Safaris are to be conducted. This hunt was no exception. Together they have experienced the best and worse that hunt can throw at you and have remained close friends all the while, well done gentlemen. 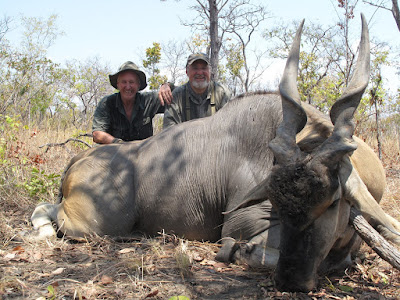 Further information about Hunters and Guides can be found at hunters@huntersandguides.co.za
Posted by D'Arcy Echols & Co. at 3:23 PM