It was easy to tell the that all was not well by the tone of voice on the other end of the line. It would seem that a 7mm Bore Snake was stuck vault tight inside the barrel of a 7mm Legend. A kink in the Snake was observed making the corner at the ejection port as the cord was being pull through the muzzle. When the kink slipped into the chamber the Snake came to an abrupt halt.

Undeterred the owner now applied more tension on the cord hanging out of the muzzle, nothing moved. Things now get a bit vague and I'm not exactly sure just what happened over the next couple hours. An accomplice to this event graciously offered assistance, 4 hands came into play, I think a come-along was suggested and perhaps a mule got involved. At some point in the struggle the forward end of the Snake parted just behind the bronze brush section of the Snake. Now no sign of the Snake was visible from the muzzle end, and a flashlight revealed just a faint vestige of the Snake in the chamber. Things had just gone South.

The team re-grouped, put their heads together again and devised a plan that apparently involved a wooden dowel and a screw mounted on the dowel that was inserted through the receiver and into the chamber end of the barrel in a last ditch attempt to snag the Snake. I think some alcohol was involved but I can't confirm this.

It was after the last attempt that I got the first phone call. The rifle was eventually packaged up and sent my way. This gave me time to think about a solution to this problem, I admit the options looked pretty bleak.

Now I personally like the Bore Snake for keeping the chamber and barrel clean on my hunts. If hunting in particularly bad weather I will generally pull the Snake through the bore before I start the day and after I return at dark no matter how tired I am. Like my knife, it's part of my field gear and I have yet to have one jam in the bore. Was the kink in the cord the contributing factor? was it the correct caliber Snake used to begin with ? While waiting for the rifle to arrive I began to experiment with different solvents that might aid in breaking down the nylon fibers on a spare Snake I had in the shop. Of the 5 liquids I tried only Lacquer Thinner seemed to make the nylon fibers at least more supple and slippery. The Net didn't offer up any incite worth bookmarking. This was going to be interesting to say the least.

The rifle arrived and the barrel removed from the receiver. The breech end of the Snake could be seen in the neck section of the chamber. The chamber was too narrow for pliers, hemostats, or any other tool I might have at my disposal to reach the end of the snake. I decided to pour some lacquer thinner in the chamber end as the barrel stood vertical in my trash can. Frankly I was at a loss as to what to do next other than fit a flat brass jag to a Dewey rod and give the Lacquer soaked Snake a push from the muzzle end. Nothing Moved, the Snake was dug in like a tick.

While at lunch I mentioned the situation to my wife as she was building a sandwich and she suggested an idea that I immediately turned 180 degrees to form a different approach from her original idea. I never finished lunch, I headed straight back to the shop. I located a 12" piece of 3/16" O-1 Drill Rod, chucked it up in the lathe and turned an ogive shape onto the end of the O-1 rod. I polished the ogive section of the O-1 with fine Wet or Dry paper, hit it with some Scotch-Brite and then heated the ogive area of the rod to a dull red color with my torch. As gently and as accurately as I could I pushed the red hot rod into the center of the nylon Snake visible in the chamber neck. The rod melted into the nylon about a 1/4 " before coming to a halt. I let the rod cool for about 10 minutes and then gently pulled on the O-1 rod. Out slid the Bore Snake just easy as you please. The nylon had indeed fused itself to the red hot end of the O-1 as I had hoped. 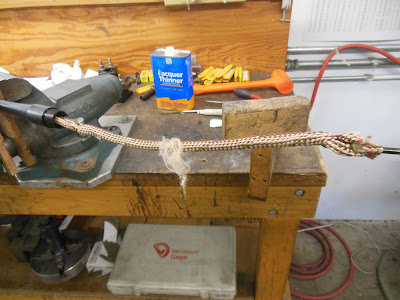 Perhaps the displacement of the fibers via the heat transfer had eliminated or reduced the size of the kink, perhaps the Lacquer thinner lubricated the Snake enough to reduce the friction in the bore even  more. I will never really know completely. 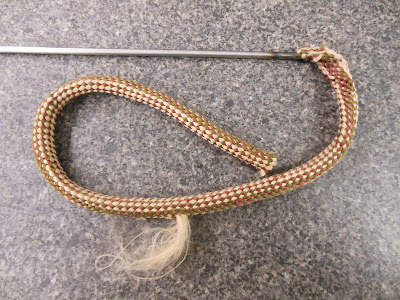 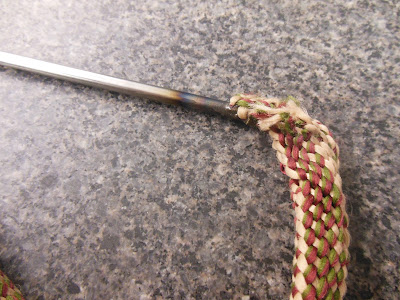 Feeling like I just snatched this disaster from the jaws of death I cleaned the barrel to insure all the  nylon residue was removed from the chamber and throat area before screwing the barrel back into the receiver. Then to further confirm that all was "happy Christmas" I dug out the Bore Scope to visually inspect and confirm the barrel was clear and ready to test fire.

What I saw next through the lens of the Bore Scope curled my toes. The entire shoulder, neck and lead area of the chamber was trashed beyond any repair from the attempt to retrieve the Snake with the wooden dowel and wood screw. There was nothing at this stage that was going to save this barrel to shoot another day. Unfortunate as this barrel had only been shot enough to work up a good accurate TTSX load just before the incident.

Time of death was called at 5:17 pm. Saturday afternoon.

Sometimes even your best attempts are just not enough.