An 8 Bore Mortimer gets a face lift

I was recently contacted by Stephen Alexander, the restoration and gun smithing talent for Lewis Drake and Associates (www.drake.net). Without a doubt Steve is one of the most talented gunsmiths that I have had the pleasure of knowing. He called to inquire into my work load to schedule some pantograph  time for a project he had at hand. I always enjoy getting projects from Steve as you just never know what will show up. Typically he supplies an original stock to use as a pattern but I've had a few patterns show up made from standard construction grade 2x4's glued together with the Head End glassed for a particular receiver with Bondo or some similar epoxy and nothing more. No butt, no comb, no grip just a glassed impression of the receiver, lock work and trigger plate on a plank. At first glance to the novice this would appear quite non professional. This couldn't be further from the truth. Steve's methods are direct and extremely simple, with no time is wasted on pattern construction.

What showed up this time was an 8 Bore double flintlock rifle stock made by H.W, Mortimer and assembled sometime in the 1800's. The stock resembled a jungle dugout. With it's massive side by side barrel channels, lock panels, straight grip, steel butt plate, and patch box cavities it is a relic from the days in India when men hunted on the backs of Elephants.

What he had failed to emphasise was the French Walnut blank to be turned was the very same width as the pattern. Not  sort of close, but the very same width as the two apposing lock plate panels! Normally you hope for a 1/4" of an inch of extra wood per side. In this case I had nothing extra, zero, zip, nada. I called Steve and asked if he had a thicker blank we could use. "Nope that's the one we have to use, should be a piece of cake for you" was his reply. I think I heard him laughing as he hung up the phone. I was trying to think as to how I had just gotten so lucky as not only was the blank the same width, but also wracked and had a 1/16" bow in it. No problem ! 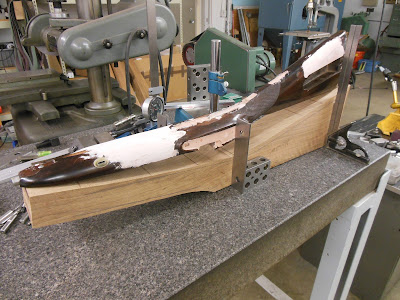 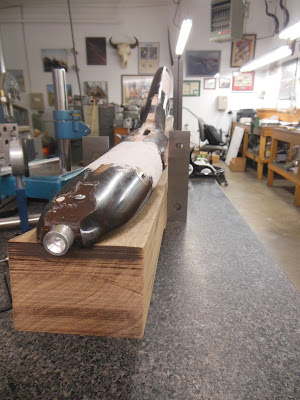 The challenge now was the exact placement of the head and tail stock centers on the pattern and the blank so the lock area on both sides of the stock would wind up with an equal amount of wood on either side as I had ZERO width to spare. This was accomplished by moving the location of the centers and placing the stock blank back in the machine many times before I felt I had the center of the blank centered with the pattern. At one point I walked outside to consider a new profession.

This aspect of the job took hours before I was ready to begin the machining process. The width of the fore-end that supported these massive barrels was so wide that I could not use both my rotary steady rest. Only the rear rest could be employed. Note to self: remove the Alexanders from the Christmas card list. 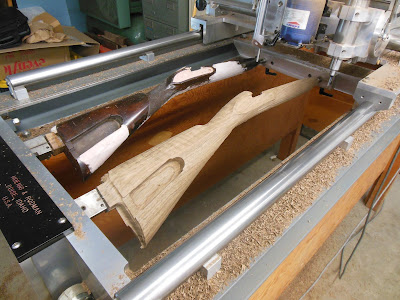 Then the French walnut blank was machined to within +.125 of the original stock profile to remove most of the excess wood. The over sized stock was then removed from the machine and allowed to hang for 48 hours to warp, bend or twist. This means of stabilization is one of the main reasons I prefer stocking with a pantograph. If the stock is going to walk around it will do it now in the pre machined state before the final inletting or shaping has begun. Its pretty hard to dispute that a blank can sometimes radically move if you have a large enough truly flat surface, a pair of 123 blocks and some indicators. While the stock shown below is for a magazine rifle the means of measurement holds true for any stock. You don't believe me, I've never known an indicators to lie. The worst movement I've ever detected was almost 1/8" on a straight grip shotgun blank during this phase. 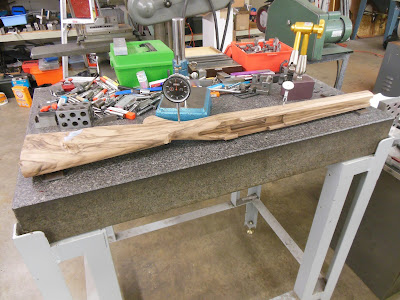 Then the Mortimer stock was placed back in the Hoenig and a rotary steady rest was attached and independently zeroed on the pattern and the walnut blank. Once both the stock and pattern were as vibration free as possible the final inletting was begun by using progressively smaller stylist for what ever cutter was required. The sensitivity and accuracy of good machine is amazing but you need to be on your toes at all times while running one. While a precision machine is nice you also need to have a well prepared pattern that lacks any voids, issues or problems, sharp cutters with matched stylist and then an operator that has more than a few hours at the helm. Lack one of these and the finished job might not be in showroom condition when finished. Not all wood cuts the same, with some blanks being real nightmares to machine to prevent wood chips the size of match heads from flying off into space. Some stocks are wonderful to cut while others will make you want to leave the shop early that day. 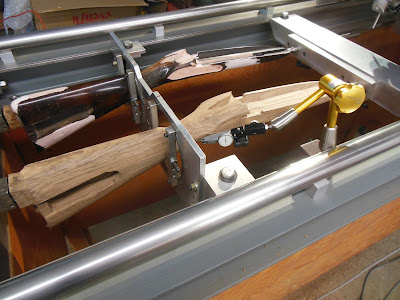 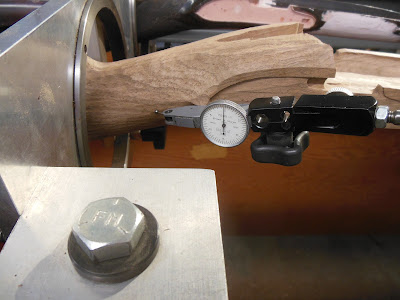 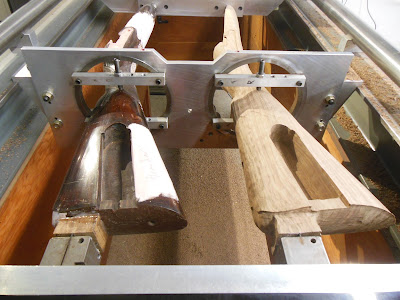 Once all the inletting is completed the OD of the stock is machined to within +.030 of the original patterns surface with the steady rest still in place. As with the inletting the rotary rest will dampen the vibration, flex and cutter bounce to insure a smooth exterior surface on the walnut. Lastly the steady rest is removed and the minimal area of exterior wood under the steady rest is now machined to match the final surface of the stock. Laps time to set up and complete the machine work for this stock was 10 hours. And yes the stock was correctly positioned and cut dead center within the narrow blank. Once again proving that skill and daring can overcome fear and uncertainty, at least some of the time.

Steve tells me the inlet went great and the finish work is coming along nicely. I'll post a pic of this beast when Steve has one available. 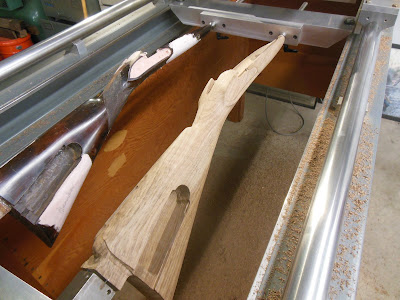 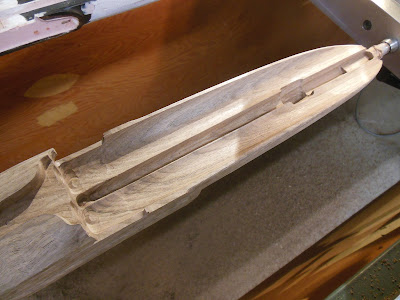 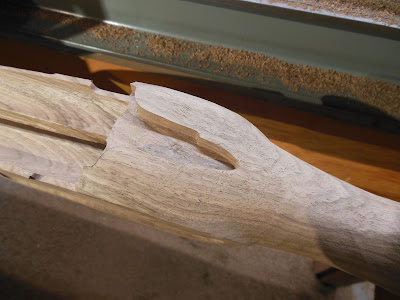 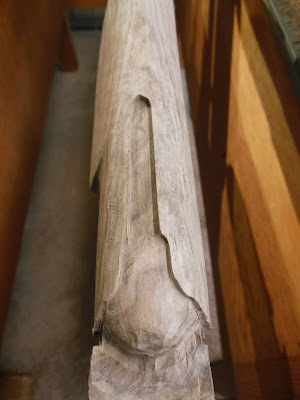