Today we were visited by Allen Barber. He is a local in the valley and stops by from time to time to make sure we're not getting complacent. It was also time to preform the once a year cleaning of his Legend. Not just the bore but a down to brass tacks complete strip and clean. Allen acquired this 7mm Remington Magnum 12 years ago. When we built it he ask me if it were mine what bullet I would use ? Without a moments hesitation I said my choice for that caliber has always been the 175gr Partition driven as close to 3000fps as I could safely get it. So that's what he has used from day one.

Allen is not against hunting in a little weather. In fact some of the pictures he has forwarded portray less than ideal conditions even for a Yeti. Enclosed is a picture of a buck he took last fall. Curious I asked him today how many animals he had taken with 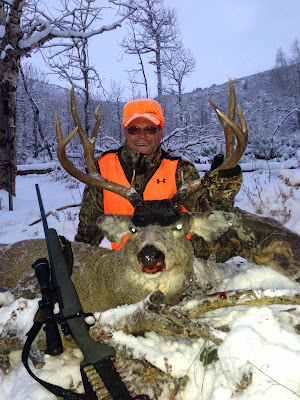 this Legend ? His reply "3 Elk, 7 Deer and 2 Antelope, I only shoot one bullet per animal per year, I haven't shot a box of bullets in the field yet". He does practice in the off season and has used this rifle at some extended ranges when it was necessary.