My daughter and I had planned to hunt in Idaho for elk last October but the things fell off the rails on acquiring the right permit and the opportunity went south. Since we each now had an general license maybe we could go to Idaho anyway and hunt waterfowl ? What with school, writing applications for college and her weekend work schedule we left the Cache Valley right after her last class let out on a Friday afternoon. Four hours later found us pulling into a friends driveway. Pleasantries were exchanged as we caught up on family events, Lexi tried on waders for the first time as other gear got sorted. We finally hit the sack late into the evening. The weatherman was predicting the dawn temps to be in the teens. I wondered if I'd brought enough kit. 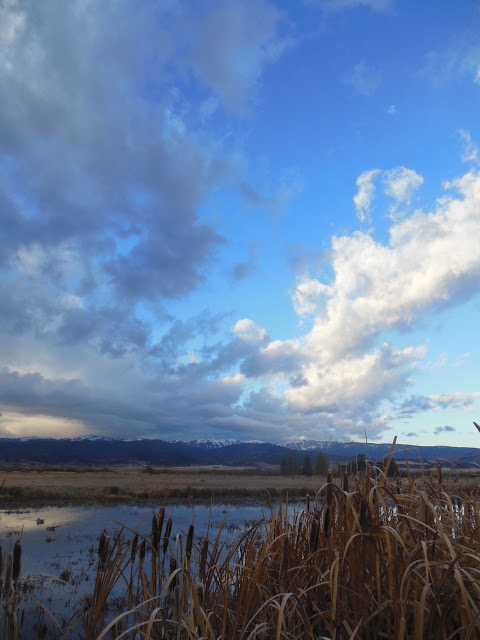 The alarm went off and we began the ritual of dressing for success in a marsh. Looking like a crew from a Duck Dynasty episode we walked out the door.  Dan's lab was biting at the bit to get into the dog box buried among a pile of decoys laid in the truck bed. Snacks, shells, licenses, calls, check! if we'd forgot it we didn't need it. 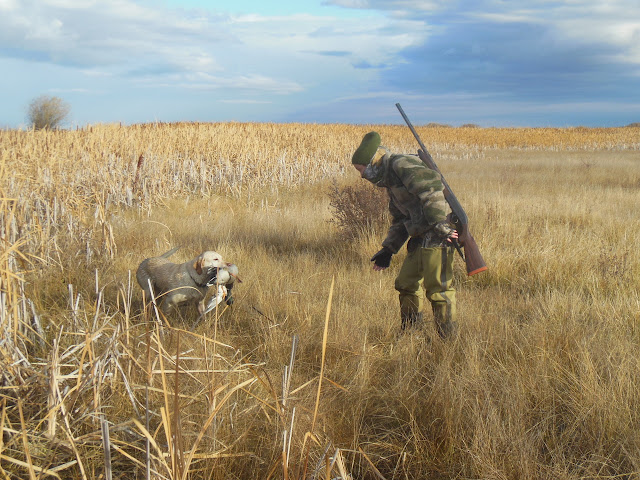 The ride was short as was the walk to a sheltered pond off the main course of the river.  It had been many years since I had hunted waterfowl which earlier in my life was a serious addiction. So I got out of the way as Dan and his son Nate began to set a string of deeks in the pond. Every serious duck hunter has their own idea of the perfect size and shape of their spread, Dan and Nate were no different. Wind direction was considered as was every other detail in deception planned for that morning. Light from the east was just beginning to silhouette the mountain peaks when birds could be seen and heard overhead. Many called out of the gloom while others piled into the decoy spread without a hint caution. We still had 15 minutes to go before legal shooting light so we just stood quietly as the ducks whistled past above us or dropped into the pond.

We weren't in a blind this morning instead standing in the head high cat tails.  Finally Nate gave the word for us to spread out along the shore line. Dan finally whispered " it's time" and everyone loaded a shotgun but me, I had come to watch.

I had patterned my daughters Beretta days before, changing choke tubes and loads while shooting into a pattern paper. All the 3 " shell's cycled at the range and I finally settled on Federal Black Cloud # 2 steel with the modified choke tube. Once we got into the marsh the Beretta balked and the entire morning my daughter had to use a single shot by default. Dan at some point said "it's a shame we don't know a gunsmith" I winced, everyone else laughed, even the dog smirked but Lexi never skipped a beat and just tried to make the first shot count.

She missed more than she hit at first and despite the noise the ducks continued to pile in. The lab was earning her pay and giving my daughter quite a show on how you properly retrieve. For some reason I'd been given a call as we left the house and joined in with Nate and Dan as big flight passed by then veered south frantically as I joined in. Dan rose out of the reeds and said "you might want to stick with the chuckle for now" Nate could be heard stifling a laugh off to my left hidden by the reeds. 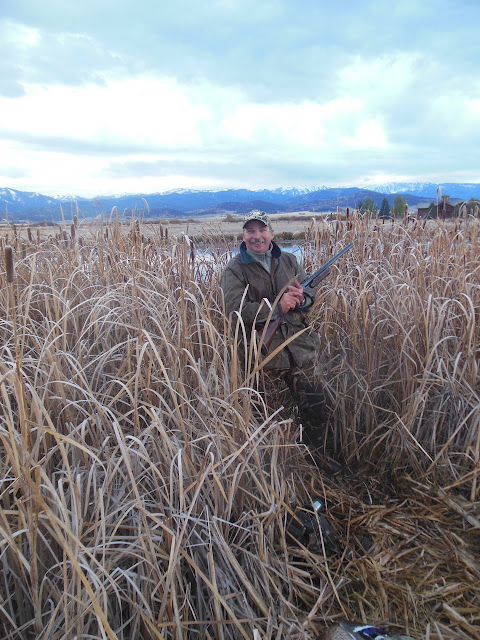 Lexi had never shot at an incoming clay target and it took awhile for her to work out the geometry involved. But I do recall the first mallard she connected with, barreling in out of the east as if possessed finally cupping his wings to then flare to the left as Lexi stood up to shoot, the drake folded then lost its grip with the sky. Even Remi looked surprised and quickly retrieved the green head. The birds kept coming steadily and within an hour Dan and Nate were close enough to their limits that we had to stop and count the birds. 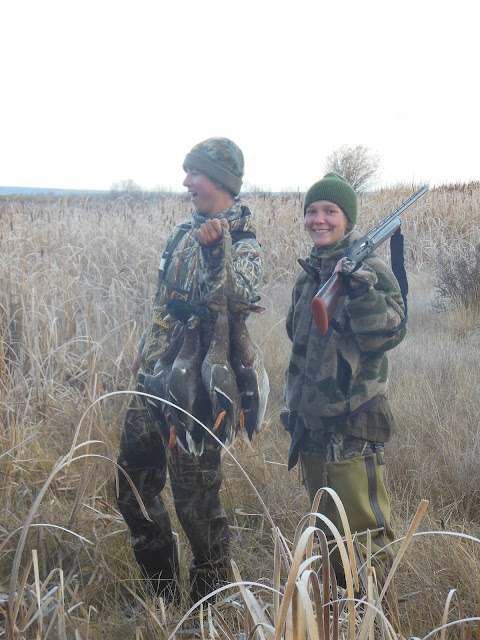 Nate was now done at seven Dan was one bird away and Lexi had four at her feet. Nate gathered up his birds and headed off to meet other friends on the river to fish while we stuck it out awhile longer. Dan hit and sailed a bird that dropped some 300 yards away. He and Remi struck out to try and retrieve it. 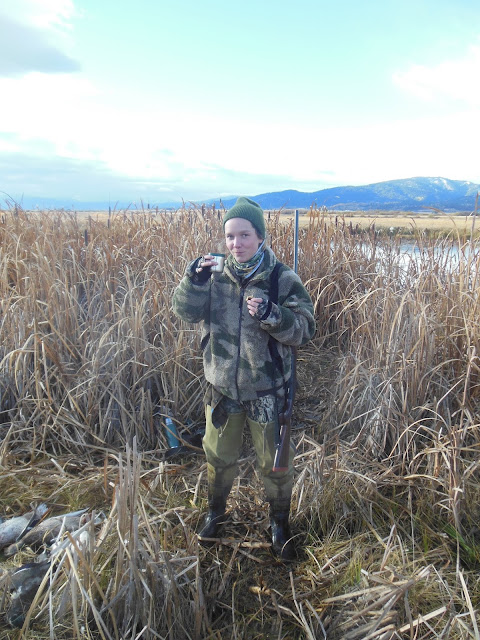 Lexi and I called as birds continued to swing by for a look and two more were quickly taken giving her six. Dan walked back into view holding the recovered mallard and said "I'm done".  It was then that Lexi said "six is enough for me, lets head in for breakfast". Dan countered "Its early Lexi, the birds are flying strong we can wait until you limit". All smiles she replied "no Dan really, I'm good".

So we gathered up the deeks, picked up our empties, policed the scene and walked to the truck. The birds had to be attended to, breakfast was made and the numbed fingers and toes slowly returned to room temperature. I've had some pretty memorable days hunting waterfowl and this one ranks among one of the best. Close friends, a good dog and the bounty of wild game to enjoy later at the table. Dan, Patty, Nate and Remi you're the best, thank you. 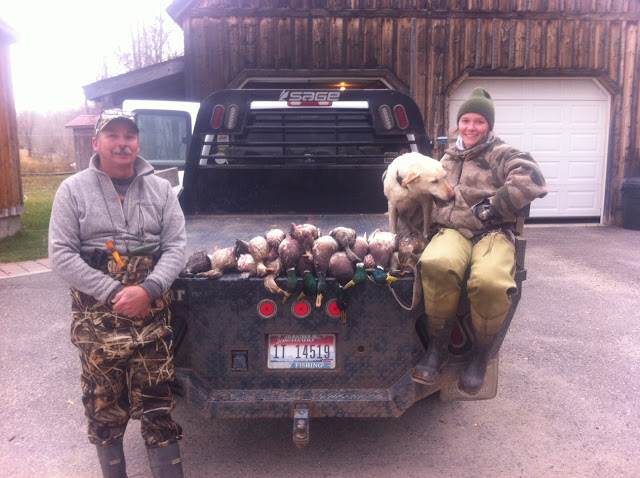