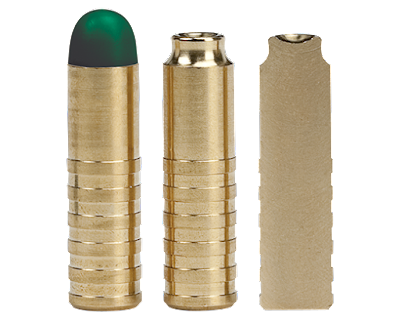 This post is shallow, I clearly admit it. Hardly anything resembling accumulated data with only 6 shots fired from a 375 H&H I had recently completed. Nothing exhaustive, and no reams of targets to offer up anything empirical. But the introductory results are impressive and if they are indicative of the Woodleigh Hydro accuracy potential I will be trying more of them. From what I've read other's are seeing the same results. Most of the reviews of this bullet are coming for Australia which is understandable as it was conceived in OZ. I have used conventional Woodleigh softs and solids for a very long time. The woodleigh FMJ's having been the favorite for many of the heavy caliber rifles I have assembled. So when the Hydro first appeared I watched from the sidelines with interest.

I had noticed only recently that Federal had been loading and now MIGHT discontinue loading this projectile for their line. So few places to really use a specialized projectile here in the states. One can understand if the bean counters at Federal had tallied up the sales then pulled this load off the line when the sales showed no promise. I tried to buy a box of this Federal load to shoot in this 375 but could not find a retailer or dealer that still had them in stock. I finally called Huntington's and Fred sent me a box of bullets to hand load.

It was a very small box to, containing only 20 Hydro's. The price was steep, but few jewels are ever inexpensive. For the sake of science I sat down at my loading and started sizing some cases.

Comparing the length of a 300gr Hydro to a 300gr TSX you will find the Hydro is slightly longer. Case capacity comes into play with many mono bullets. Fortunately this rifle shot extremely well with H-4895 when under the TSX so I decided to try the Hydro with the same powder ? This particular powder charge came right up to the base of the Hydro. Perfect ! 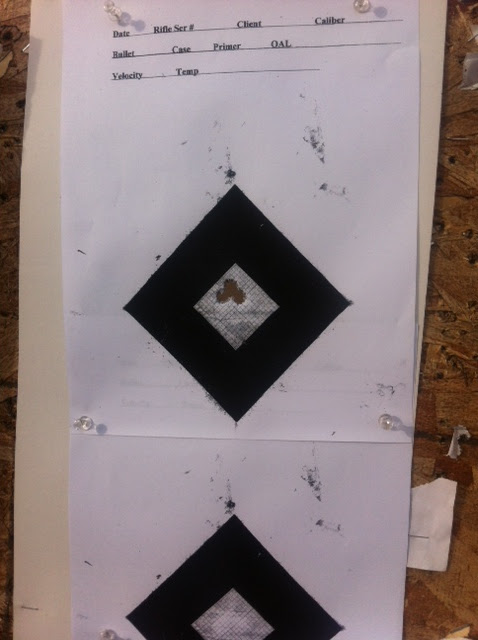 As I was still doing the final load development for this 375 and I was hopeful these 2 Hydro's loads would show some promise. Having shot thousands of Woodleigh's for decades I settled in behind the rifle with a certain amount of confidence. 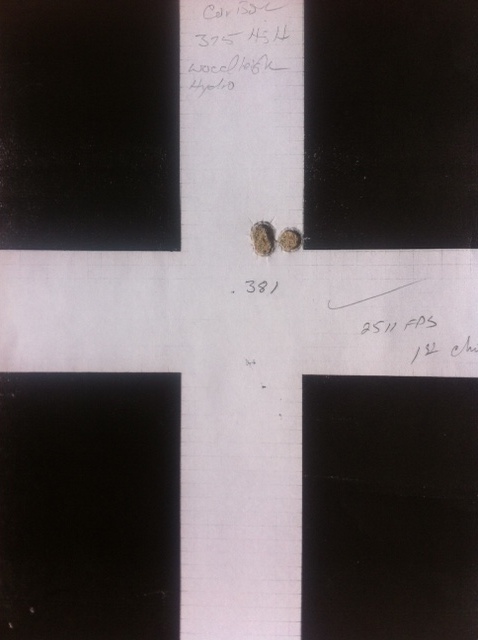 I noted the 1st point of impact, slid back into position and sent the 2nd bullet down range. When I recovered from recoil and looked through the S&B I did a double take. Hmmm! then confirmed the impact with my spotting scope. It could it have been a fluke? so I sent the 3rd round down range.

Looking again through the ocular lens I started feeling all warm and clammy. I decided to walk down and mark the target. My, my lets see if I can do that again, and I did. 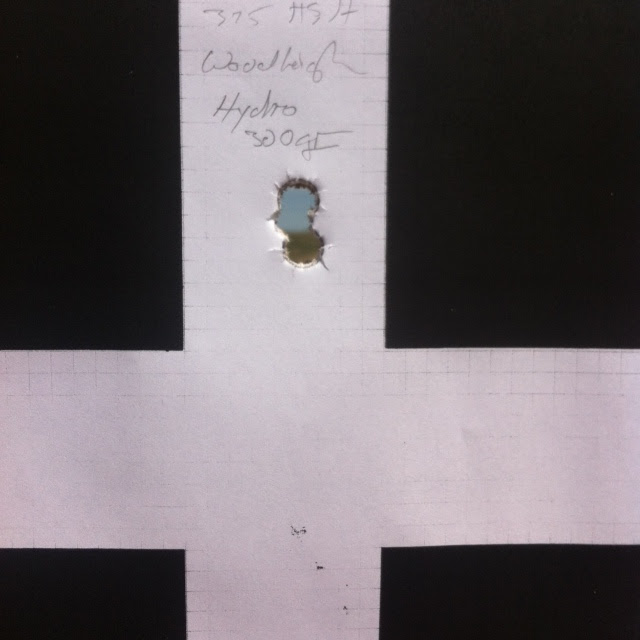 This 2nd group was fired with 1 more grain of powder with the same results. So what this tells me is that I will be trying these Hydros again and soon. It was evident to me that the bullets original meplat design would reliably feed even before the nose cap had been engineered. The current capped version fed just as well as or better than any Spitzer soft point I'd run through the gun as it was being built.

If you read the fine print on the Woodleigh website the Hydro was designed to perform as both a hybrid Soft Point and Solid that penetrates into next Wednesday. Maybe they said it in a more scientific and eloquent way but that seems to be the idea. If you can get by using one bullet to cover Impala, Sable, Eland, Buffalo, Hippo and Ele's on the same hunt I can see the benefits big time. Is it a Cat bullet?????? well maybe not in the traditional sense but !!!!!! Is it the one bullet answer ? for some perhaps it is.

More will be ordered, more will be shot, notes and an opinion will evolve, so far my limited exposure to the Hydro has left me with a good impression.