Sack It And Pack It It's Well Worth The Effort


The next time you'r getting set to fly to a hunting destination you might want to consider how you pack some of your duffel. Until you've used a couple different sized stuff sacks or your day pack as a rifle rest you just haven't been living right. Crammed with socks, underwear or any other clothing items you now have all that is necessary to confidently confirm the zero on your rifle when you land at your destination.

We've all seen the drill when you're asked to check the zero on your rifle and ushered down to the river bed or similar location. Some camps are equipped with pretty nice shooting benches, some even have a mechanical front and rear bag rest. In the amount of hunting I have done that required flight to these destinations I have encountered these amenities only twice. One of these was during the latter part of last May. The other time was in the early 90's

Consider yourself lucky if there is at least be table top, the hood of a truck, or sizable flat topped rock that will allow you to kneel behind it and use you pack and stuff sacks as a rest. Sometimes it's just a dry river bed or a tree to lean against. In the case of the latter two you had better been shooting your rifle on your local range prone, over your pack and wrapped up in your sling long before you're wheels up and heading off on that hunt of a lifetime. As this should give you a rational idea of what you can expect from YOU in regard the type of accuracy you should expect to confirm your point of impact under those more realistic field conditions. What a novel concept !

Again if there's a shooting bench complete with a rest when you arrive, lucky you. But what if the rest itself is fairly high and the seat fairly low and you stand 5' 2" flat footed ? I could go on and on about the variables but you do need to check that zero. I tend to believe that when a rifle is placed in the baggage hold, taken to 35,000 ft then subjected to -25 temps within that hold for up to 16 hours that the dissimilar materials that make up the erectors system in any scope can very possibly and probably move, i.e shift your point of impact while in transit, call me skeptic if you want.

Hopefully over the years you've laid in several stuff sacks in a variety of sizes. The one covering your sleeping bag is a perfect example. Others of smaller diameter will be relegated to rain gear, gloves and hats any combination of kit. 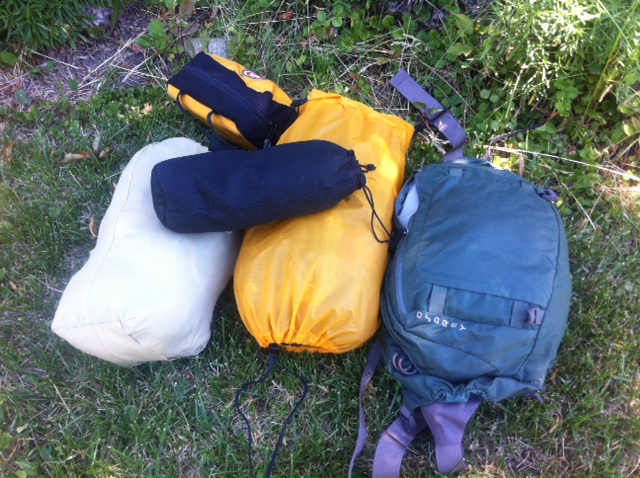 One stuffed sack should give you the approximate height of the for-end rest you use at home. My rest allows the fore-end to bottom out on the sand bag approximately 6-1/2" above flat surface of a bench top typically. A sleeping bag in a stuff sack often times is about that diameter. 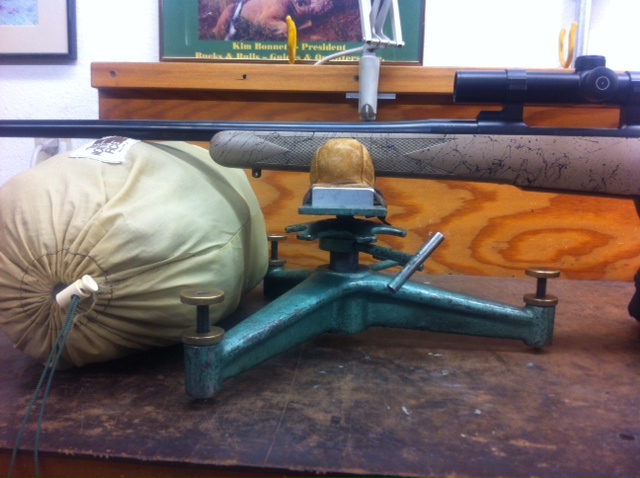 Or a combination of 2 bags can serve the same purpose and allow more height latitude on site. As will cradling the fore-end in your palm which is what you'd want to be doing with any heavy caliber. 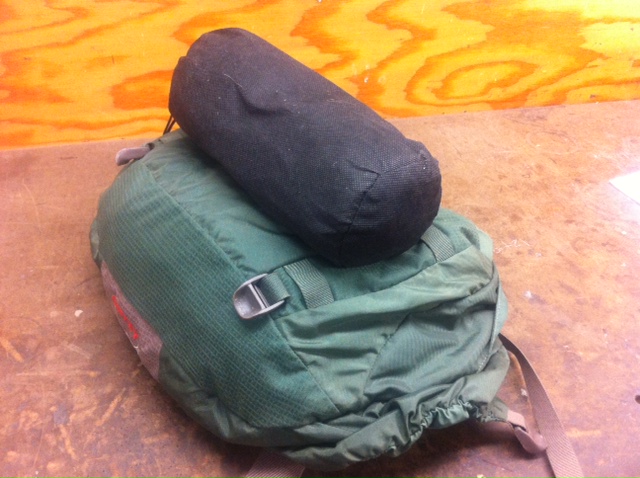 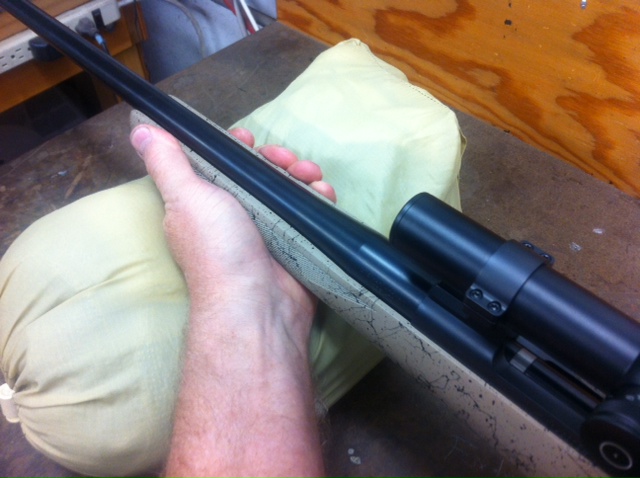 The average height of my rear rest is approximately 4" at the leading edge and bottom of the bunny ears. Once again find and fill a stuff sack to meet that need before you get on the plane. 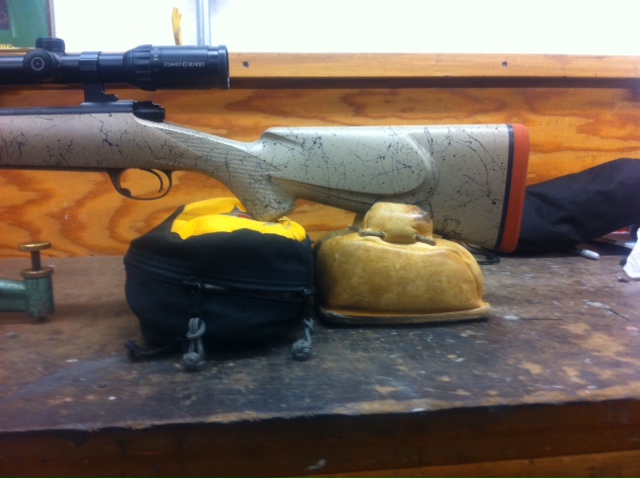 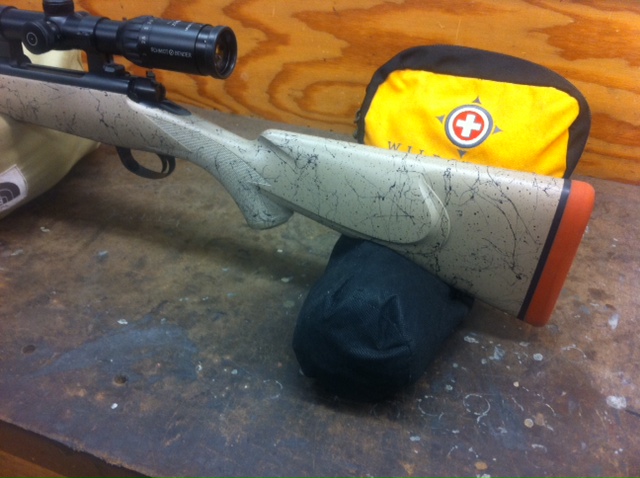 Then we have the issue of targets. In some camps your target might be a cardboard food box, maybe stump with an empty bean can sitting on it, perhaps a paper plate with a hand drawn sharpie center or my all time favorite a blaze hacked into a tree with a panga. 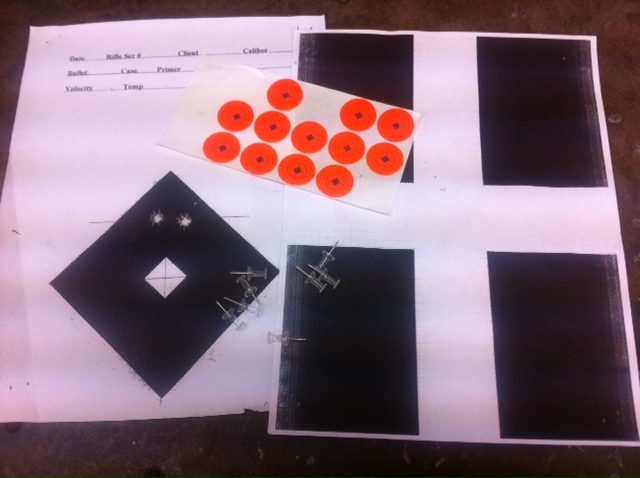 If you like shooting at Orange dots, no problem, how about diamond shapes or squares ? Let me ask you just how heavy are two of your favorite targets images placed in your duffle? While we're at it also toss in 8 push pins to anchor the target to that wet wooden back stop or cardboard box if you're lucky enough to have these. With the increasing use of come-up turrets it would be nice to confirm where your Zero point of impact should land on the target by marking a target ahead of time. Note the target on the left and the bullet holes cutting that line.


If you determined and packed these stuff sacks at home then your sight in session with your guide will be pretty seamless with very little drama. So what if you have to make a scope correction, ammo at this stage is cheap, always remember the cargo hold ?

Minimal shots fired with reasonably controlled conditions and we're ready to roll, no guessing in the heat of the moment.