Over last year or so I have received a number of Web inquires as well as approached in sporting goods stores and then asked about my opinion of the Vortex line of spotting scopes. Those asking the questions were hunters or guides trying to make their dollars stretch a far as possible while at the same time satisfying the requirements for good optical performance. The price point maximum seemed to fall between the $800 and $1200 price range. So lets call it a potential investment of $1000 give or take.

I had never looked through, much less tested any Vortex Optics but did notice this year on my annual Antelope hunt in New Mexico that there were more than a few Vortex spotting scopes mounted on the tripods of other guys I guide with. You had to notice, you couldn't miss it. Judging the difference between a very good antelope and a net book antelope is akin to comparing the size of two shoes, such as a size 10 and a size 13 of the same color and make at 600 to a 1000 yards. Granted a real toad is a no brainer, its the "almost" bucks that require a good optical tool for real evaluation. We all guess, I prefer to guess smart based on what I can actually see.

An advantage of being in a guide cluster on an afternoon between hunts is having a variety of optics set up and focused on the same animal, rock or tree. Then having each guide look through the very same optics and compare the image in this line up. What is quite apparent when this happens is not every spotting scope or binocular offers the same image quality to each and every viewer. What I mean is regardless of price, objective diameter or lens coating there will always be one guy that insist that his vision and his eyes are better served by a particular optic regardless of brand or the cost. As long as the scopes are set on the same power, looking at the same bull or buck under the same conditions this anomaly will often occur. I have witnessed this many times over. So money doesn't always buy you contentment or world piece when it comes to optics.

With a serious test drive in mind I contacted Shamus Terry at Vortex Optics and made arrangements to purchase a Razor HD 16-48x65mm Straight Body spotting scope. This model fell into that $1000 dollar price bracket that others had questioned me about and was compact and light enough to carry all day without it feeling like a anvil at dark. Although my Antelope hunts were over and a last minute Shiras Moose hunt had just been completed there was my daughters Utah deer hunt to try it on as well as the continual accuracy test that are required in the shop on a regular basis. 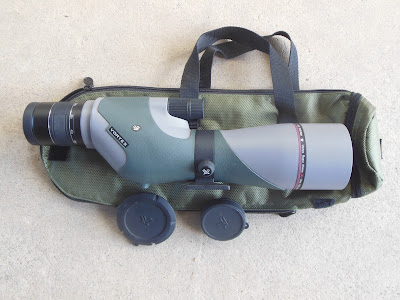 The Razor arrived in a bomb proof box, that was nice to see. It came with two rubber lens caps that are not connected to the scope or each other in any way. There is a small hole cast into each lens cover for a lanyard, bungee, or log chain. I'm making the prediction that if you don't tether the lens covers in some manner they will come up missing in short order. This is not a failing of Vortex rather the nature of the beast industry wide. All lens covers seem to made in the color Black. I'd rather see them all made in Florescent Orange. While it wouldn't always prevent them from being left behind, I'd bet it would help keep them from becoming lost in the ground clutter more than once.

The Ocular lens attaches to the body by rotating the bayonet mount into the main body and features a permanent lock that prevents the lens from becoming unscrewed and falling off while your glassing. This is a must in my opinion. This was real pain in the ass on the early Leica Televid's. More than once I have had to fish my rogue lens out of the dirt down around my feet. The Razor also came equipped with a Nylon cover which I eyed suspiciously. Once out of the box I mounted the scope on a Bogan tripod and stepped outside the shop. About a half a mile to my east are the foothills of a mountain range that rises out of the valley floor and to the south of me an alfalfa field that has a resident herd of deer and flock of turkeys that can be viewed almost any day. I picked a ridge on the mountain to the east, found an interesting looking tree, focused the lens and ran the Vortex through its power range. I found the fine focus knob easy to adjust and comfortable to use. The eye relief is fairly short but adequate with both the naked eye and glasses. The scope stayed on the tripod until dark allowing me to look over the Mule deer grazing in the alfalfa until it was to dark to discern anything but blobs in the gloom. So far so good. 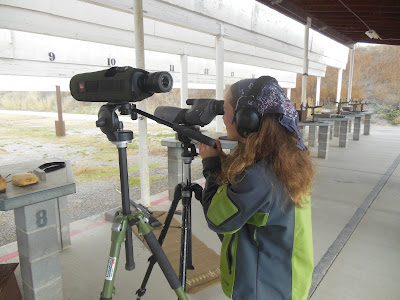 My daughter wanted to go to the range and get in some more practice before her hunt so we packed up the Razor and my Older Leica APO 16-48X62mm and hit the range one afternoon under overcast skies. Each scopes were mounted on a good solid Bogan tripod, set side by side then adjusted to the same power.  Over the next hour and half were used both scopes to monitor our shooting. 6.5mm bullet holes were easy to see out to the 300 yard berm through the Razor as well as the Leica. We compared the image quality between the older Leica and the Razor, her young eyes verse my older eyes. The edge to edge view in the Razor looked very crisp and light transmission was right there with the Televid. The light coming through the body looked 100 % natural without any tint. 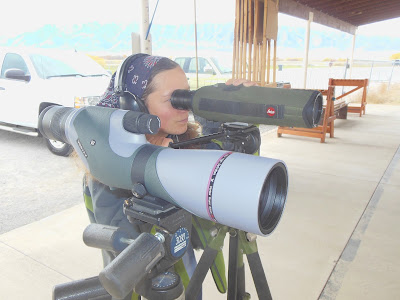 At the end of the shooting session I was impressed with the Razor's performance. We made one more trip to the range before the Deer hunt was to begin. This time my daughter was shooting prone at an Antelope silhouette at 200 and 300 yards. As you can imagine seeing bullets holes in this target could be a challenge at times depending on the light conditions, mirage and temperature. The conditions that day were about ideal and as she shot I called her shots at both ranges. The Vortex was hanging right in there. So for those primarily interested in target shooting this spotting scope has some application to be sure. 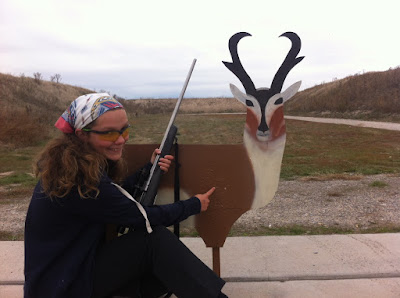 Now to test the Razor in the field. Unlike my friend John Barsness I don't really have a set mechanical testing procedure anywhere near as comprehensive as his. I'm more a hands on, see if we can use it or break it kind of guy. With our experience at the range I decided to leave both my Leica's at home, go for broke and use the Vortex on my daughters hunt. We were lucky enough to be hunting on one of Bucks & Bulls-Guides and Outfitters leases in Northern Utah. Due to my daughter's academic workload we had only 24 hours to find a buck she'd want to try and shoot and put it all together if we could. I hoped we could be selective to a point. 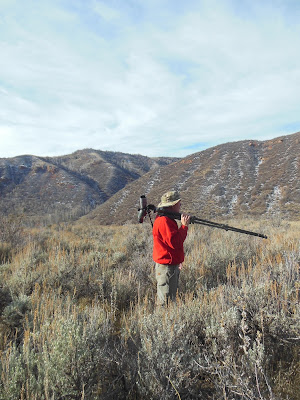 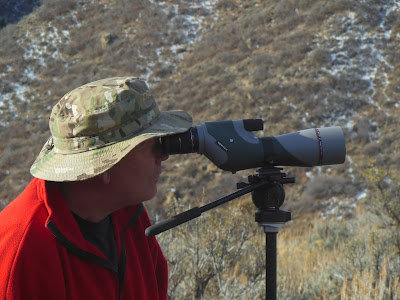 Glassing was going to be especially important with so little time allowed for this hunt. While I do not go out of my way to place any of my hunting glass in harms way I don't baby sit them either. For as long as I have been using a spotting scope they have been mounted on my tripod and cantilevered over my shoulder 80% of the time when I am playing the part of the Fundi. To do otherwise can waste critical time when time is at a premium. To prevent the scope from unscrewing itself from the mounting base plate a secondary stop screw must be installed ahead of or behind the main camera 1/4x20 threaded stud or you are courting disaster. A cheap tripod and mount is never a good call when tossing a scope over your shoulder. A sudden shift in balance and the sound of a thud behind you is not a great way to impress your hunter. Within the first 1/2 hour the OEM supplied nylon cover went into the pack, I can see no use for this cover in the field due to its design as it takes more patience than I have to fight my way through the zipper system, in the field this cover is utterly useless. As I stated earlier I can see rubber lens covers being lost quickly without a leash on each of some sort. 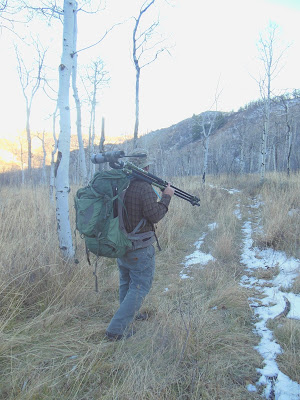 We started the afternoon hunt and covered as much ground as we could optically often looking at deer well over a mile away. Buck after buck was given the hairy eyeball and the Razor allowed me to make the call to either commit to a stalk or continue to search. We counted points, we guessed at the age class, we picked apart maples and peered into timber. We put the Razor to the test in the best way I know how. As the sun was sinking a buck appeared on a ridge above us and I could tell Lexi was getting the itch to shoot. This was her second deer season and we still hadn't found "the" buck despite her all out effort the year before. As this ranch is managed for quality I felt we needed to continue to look and be as patient as we could afford in the short amount of time we had. Through my older Zeiss 10x40's Classic's the buck appeared mature but standing in the shadows of the maples I couldn't quite clearly make out the complete frame. However the the Razor plainly proved the buck to be of average framed 3x4, nice but not quite what I was looking for. Lexi looked through the scope and at this point I think she was hoping the scope would take a fall off the tripod and break into no less than 40 pieces. All that clarity was now clearly not working to her benefit or so it seemed at that moment. Based on what we saw I made the call not shoot the 3x4. Had we done so we would not have run into this bigger buck a little further down the canyon just at dusk. This buck was close enough that the Razor never came into play. Clarity can help you make better decisions, the proof is in the pudding. 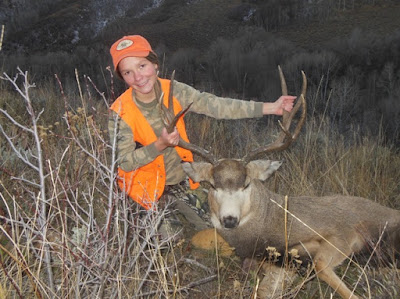