We just received this pic from PH Campbell Smith. Cam has just returned from Botswana after a successful hunt with Dr. John Couvillion where they took this bull after a long hot hunt in unit NG-47. This bull was found after picking up the tracks following them for hours then looping ahead by Land Cruiser and finding the bull later on 40 K's from where they had first started. Water is apparently very scares in the concession this year and the buffalo are in such large herds that the limited bore hole pumps are having a hard time keeping up with the watering buffalo mush less the Elephant coming into the area. Cam felt what elephants were entering the concession were leaving just as quickly. But patience and perseverance paid off in the end with this very nice bull. The bull was taken with a Legend Heavy Sporter chambered for 458 Lott and a 500gr Woodleigh FMJ Norma Factory load. Well done Dr. Couvillion & Campbell. 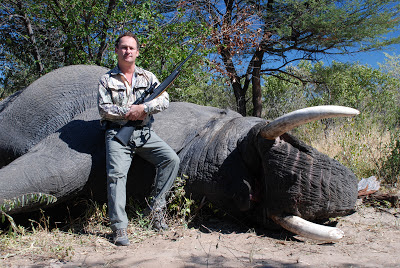