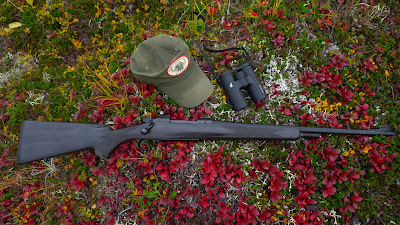 I took a Legend on a Yukon sheep hunt 6 years ago and the Model 70 action was purposely polished to a 400 finish and left in the white. I was testing the protective properties of a lubricant called Corrosion X that was recommended by non other than Phil. This oil was developed as an aircraft lubricant and is now our # 1 go-to gun oil. For 12 days the rifle was pulled in and out of sweat soaked scabbard, drenched with rain, pelted by hale and carried with my grimy hands. This abuse can be tough on any surface finish much less a receiver in the white. I wiped the rifle down every morning before we left camp and every evening when we got back. Laps time per day, 5 total minutes.The Corrosion X kept the action rust free in the areas that I could wipe. The metal under the stock line where I could not wipe did begin growing a very, very fine film of rust in certain small areas. Proving that maintenance in the field is just as important as the coating on the firearm. Having spent more than a few hours in hunting camps I can honestly say I can hardly remember seeing anyone wipe down their rifle after a long hard day on the hill. This disconnect with daily rifle maintenance and how it relates to performance just boggles my mind.
Posted by D'Arcy Echols & Co. at 9:52 PM