Bret Wursten just returned from a Moose hunt in the Yukon. His outfitter was Dan Reynolds of which he gave high marks for the logistics, camps, equipment, etc. Bret took this bull at about 200 yards in a typical Canadian downpour with a 180gr TSX hand-load of his own construction. In the 10 days Bret and his guide only saw one other Bull Moose. Both were called in by the guide from quite a distance. Bret's Legend has a switch barrel chambered for 375 Wtby which he has already put to good use in Africa. Beware of the one gun man, especially if it has 2 tubes. 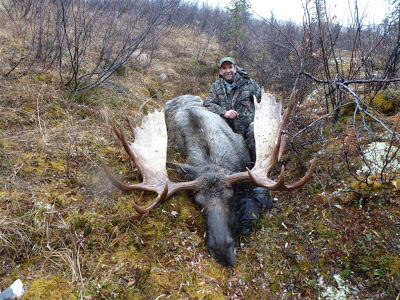