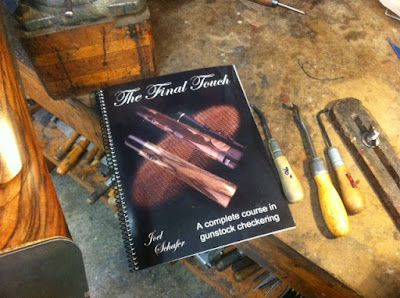 Finding any book written on specialized gun smithing techniques can be akin to finding a $10 dollar bill under your couch cushions. It can happen, but not all that often. When a book of this nature turns up I tend to put on a pot of coffee and migrate to a chair. All work for at least the time required to read the 1st two chapters is usually put on hold. If it's really well written the all bets are off. Anything that even resembles meaningful production comes to an abrupt halt for quite sometime.

Recently I had cleared my bench to get ramped up for a couple weeks of checkering. I was sorting through all my tools when a friend stopped by and noticing my next victim in the cradle he asked If I had ever read Joel Schafer's checkering book ? "No, I've never heard of it".  The next day he dropped it off and I'm glad he did. The Final Touch stopped most of the  production that day. Yes, I can checker, it comes with the job description but I'm always interested in other peoples techniques and this book had some slants on this subject I hadn't thought of and frankly I need all the help I can get.

The only other book I'm aware of that addresses this subject is Monty Kennedy's The Checkering and Carving of Gunstocks and was 1st Published in 1952. When I entered gun-smithing school in 1976 it was the only book written solely on the subject of checkering gun stocks. It was and still is an educational piece of literature on the subject. I clearly remember one piece of advise in the book from Len Brownell in regard to preventing over-runs. His advise was pretty simple"when you come to the boarder, you stop" unfortunately I have not always followed that advice to the letter.  Kennedy's book gave a lot of people the guts to pick up the tools and learn the skill, it was all we really had.

I can say without any reservation that after reading Joel's The Final Touch from cover to cover twice that this is well worth the price of admission.

Joel's easily explained manner of instruction has been well thought out. Composed of 101 pages and over 200 excellent color photographs it is hard to imagine how you could make a more comprehensive body on the subject. Broken down into 17 chapters covering every aspect that one could possibly address on the subject. There is literally nothing left out.

I have seen both Jerry Fisher and the late Monty Kennedy lay out checkering patterns on fore-ends with little more than two master-lines and grease pencil diamonds applied as arbitrary borders. Then effortlessly develop the pattern one line at a time with a power tool. This type of free style skill is only achieved after checkering many acres of walnut. I personally do not have that skill set nor the bravery required to pull it off. I need a map thank you 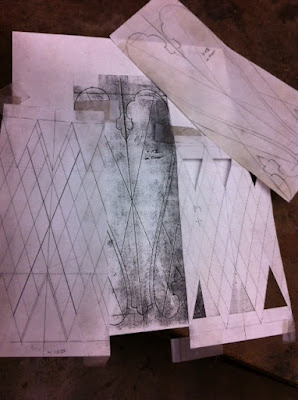 So I was pleasantly surprised to read of Joel's method of using paper to determine and transfer the fore-end pattern based on actual volume of the fore-end as I have used this same method for almost 3 decades. The 1st time I was made aware of this technique was after a colleague had returned from a Phil Pilkington seminar with some graph paper already lined out with a layout diamond pattern ready to go. The idea did have some merit but did not adequately take into account the radical fore-end taper that was so popular at that time. I began to experiment with the idea but soon applied it in the same manner Joel addresses in this book. This method works extremely well if you spend the time getting the fore-end symmetrical to begin with. 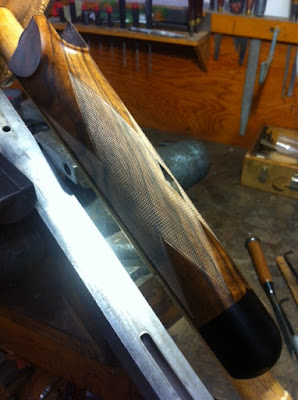 The Final Touch also explores the use of power checkering heads. Early in my career I owned and used the MMC checkering tools on two different occasions. The only issue I ever had with the MMC was 50% my cross diamond layout on certain fore-ends had a distinct diagonal slant along the perpendicular length or line of the fore-end. As this anomaly always bugged the hell out of me I eventually gave up the MMC and continued to use hand powered push and pull tools and did not suffer that same diagonal effect. After reading chapter 16 & 17 I think I now know why I develop this cross diamond slant

As the quality of push spacing tools and finishing cutters is currently at an all time low I'm seriously  thinking about picking up a power tool once again. Having read the The Finishing Touch certainly has prodded me even further in this direction. 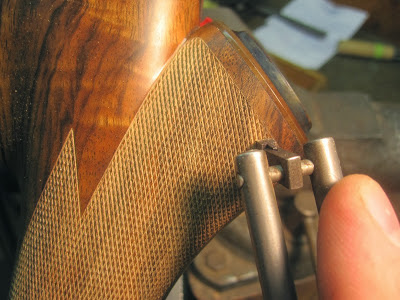 Joel's book should be in the library of anyone considering checkering a gun stock as a hobby or as a professional reference book for full time stock makers. Well, written and again filled with excellent photographs it may soon become dog eared with your other favorites.

The book can be ordered directly from Joel by calling 308-760-2805. The cost is $75.00 plus $3.99 shipping and handling. Listed on Amazon as well I'm told the actual deliveries are made directly from Joels location anyway so might as well shop direct.