A majority of machine work has now been completed to the magazine cavity and feed well but the rail width modification is still required.  The OD of the belted case as well as the shoulder OD is larger than the 270/30-06 class of cases so additional room through the rails must be made to accommodate for these larger case diameters.

It is the height of the case that protrudes above the rails and allows the lower edge of the bolt face to engage the protruding case and then allow the bolt to shove it towards the chamber. The case must stick up through the rails ENOUGH as its pushed forward or the bolt face will override the case head and cause a jam. Most 270/30-06 Model actions are approximately .545 to .550 in width from one feed lip or rail to the other side at the very rear of the feed well opening directly above the magazine box and then widens to .600 to .610 directly above the bottom of the bullet ramp. This geometry has work since the 1st Pre-64 stepped off the bus so it's hard to argue that it isn't adequate, is it prefect? well...............

All the next cuts will be made from the center-line of the receiver so you must establish the best means to do so. Again the fixture I use allows me to do this very easily. Finding the center-line I start off and finish using only a 3/32" carbide end mill. I widen the existing width at the rear of the rail from the original .545  to .610. Taking a photo of this operation is difficult at best due to the close proximity of the mills spindle being so close underside of the action.

With the help of the DRO I will now cut stepped flats into the rails in incremental lengths from the rear forward and later on file and blend these transitions. If you had a CNC you could write a program to do this parabola shape, push start and step back. 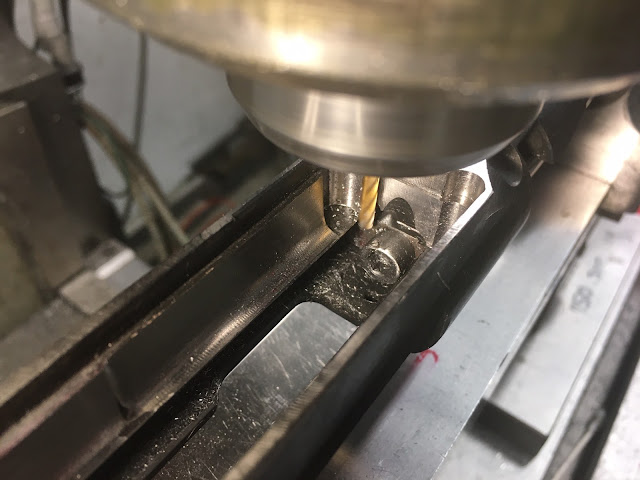 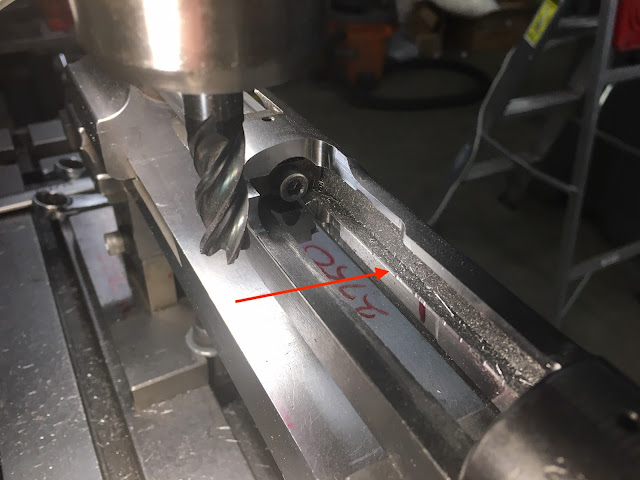 Cutting the width and or SHAPE of the rails becomes a matter of interpretation and just how anal retentive you choose to be and still live with yourself. I would say that every Pre-64 70 I have ever worked on left the factory with the rails being straight in nature and wider across the front of the rails above the feed ramp. What I prefer to do today is the widen the rails in the partial parabolic fashion. Tom Burgess referred to this as a candle flame shape. Wider in the mid section of the rails than in the front and in the rear sections, How much you say ? at the widest point .620 to.625 seems to work out pretty well for me for the 300 H&H. When the parabola cuts are blended you also need to file or stone a radial profile to the top and bottom side of each rail. Failure to so will cause the brass to hang up as each case if rising out of the feed well and mag box. Time spent polishing the blended rails will pay off 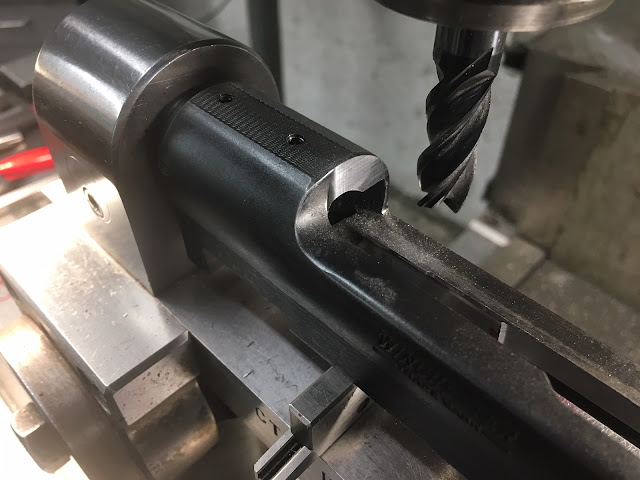 The number 3 scope base screw hole will always be cut away in this operation so you'd better have plans for repositioning that screw hole and what rear scope base you will ultimately use after this conversion. 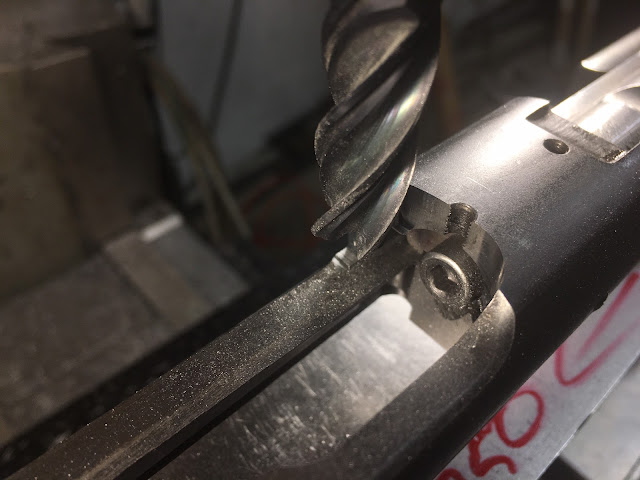 How far you go to the rear is up for considerable debate and much of the next series of cuts will depend on your extractors length. The Standard OEM Pre-64 extractor is approximately 4.420 in over length. Some gun smith's will insist that the tail end of the extractor MUST be tucked under the right side of the rear bridge with the bolt turned down into full battery so the extractor's tail has no possible way of becoming jammed in ejection port. If you follow this as a rule then you can really only open up the ejection port to approx. 3.400.
So if this is a concern you can modify the rear bridge as shown below, similar to the original factory receivers leaving a standing wall and blending an angular cut from the 3.600 opening you've established from the center line of the action out to the edge of the standing wall.
This Pre-64 30-06 length action below has been chambered and set up for a 7mm Mashburn with an extended throat and uses up most the 3.600 real-estate in over all loaded length. To keep the 4.420 OEM extractor tail under the rear bridge I needed leave some standing wall as shown at the arrow. The OAL of the new opening is 3.600 but the port length is still 3.400. This still requires snaking the rounds in though the ejection port and under the scope mounts. While this takes some finesse and practice for rapid loading the extractor stays contained 100% of the in time in or out of battery. I've done many conversions in this manner especially when chambered for heavy calibers and are iron sight dedicated rifles. 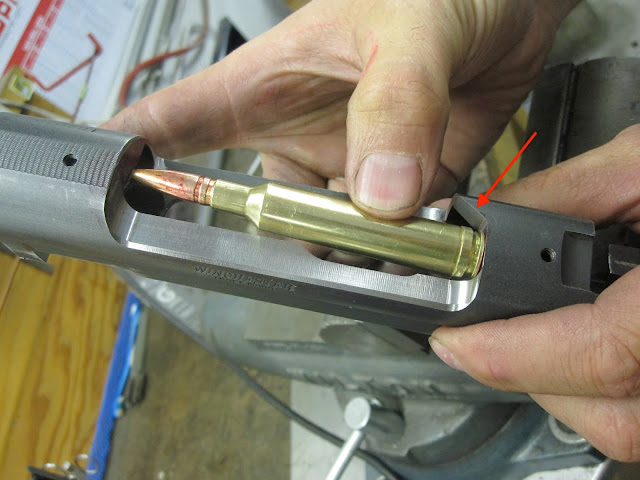 Then along came the Willams Firearms Company and their version of a M-70 retro fit extractors. The beauty of this Williams extractor is some of these were machined with an extra .130 in extractor length. I can't remember what date these came to my attention but I've used a dozen or so of these and still have a few squirreled away. This now gives us another option if you have one of these longer Williams units. To my knowledge Willams has ceased production and these are no longer available.
Jim Wisner from time to time will make a run of an even longer extractor 4.900 as seen below for both right and left handed current production model 70 actions and these are also of excellent quality.
Williams Long Extractor 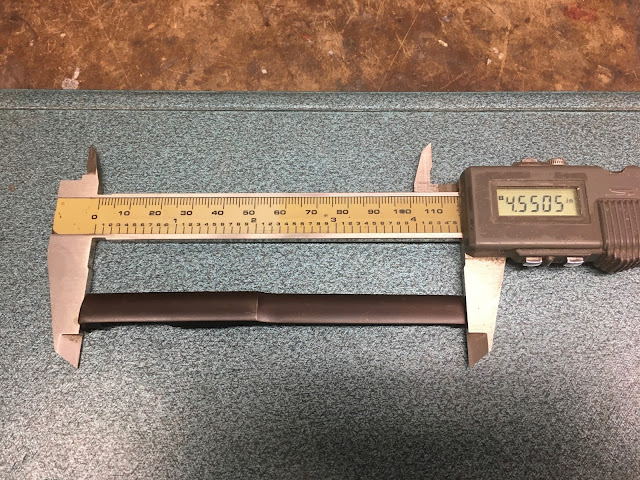 Provided you have on hand 0ne of the Williams longer than normal Extractors you can now open the ejection port to 3.600 completely. "But," you say "the tail will not be buried under the rear bridge !!!! " Well Yes and No as you lift the bolt out of the battery position and the bolt body rotates up the extraction cam the rearward movement in rotation places the LONGER Williams extractor tail under the rear bridge well before the bolt has completed its rotation. 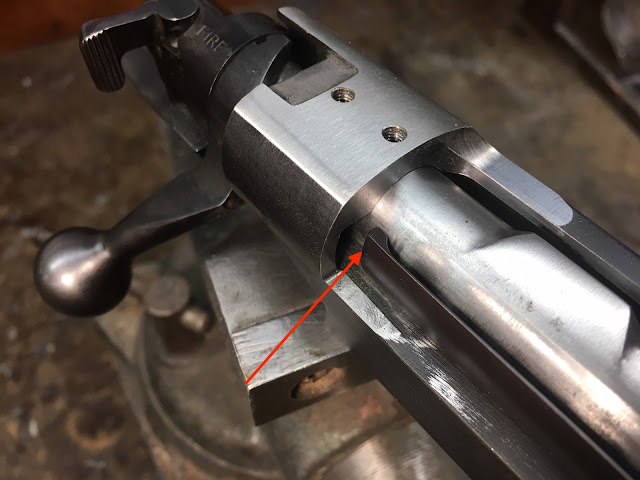 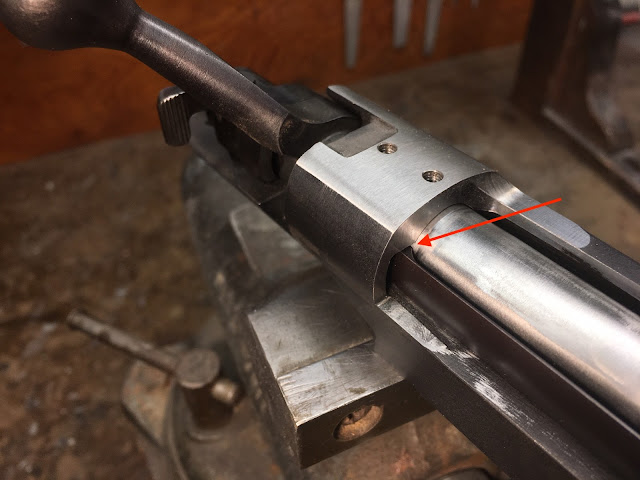 To confuse the issue even more below is a standard Pre-64 action and OEM follower that is chambered for 280 Remington that has the ejection port opened up the 3.416. Note the tail of the extractor showing with the bolt in full closed battery and then the tail tucked under the rear bridge as the bolt is opened. The result is a longer loading port and a captured extractor tail.

The wonder of it all ! 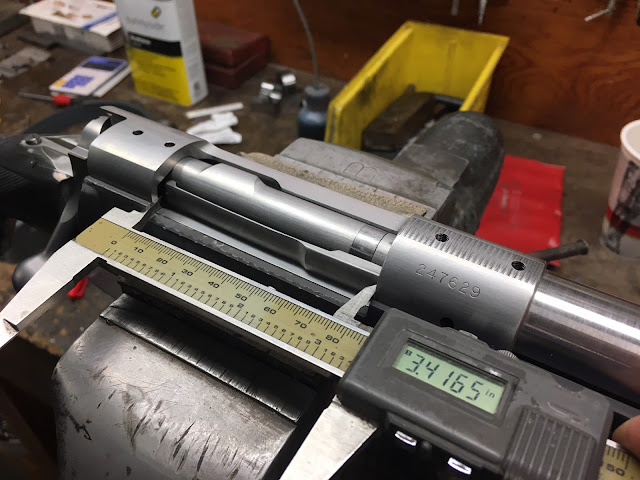 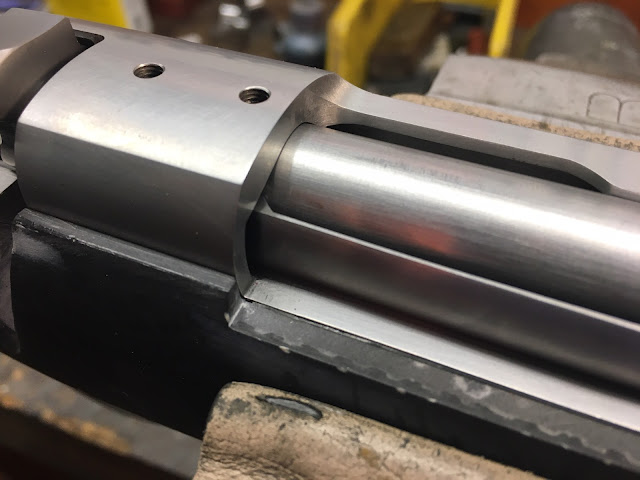 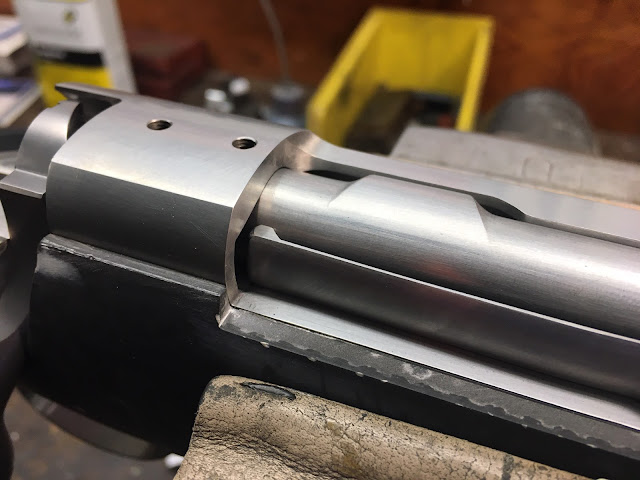 A lot depends in any conversion or modification on the the materials at ones disposal. You will see similar adaptations of this on many of the Magnum length actions chambered for long cartridges. Note the visible exposed tail on this extractor fit to this H&W magnum 98 action, lift the bolt and the tail end slips under the rear bridge before the bolt rotates completely up the extraction cam, no fuss-no muss. 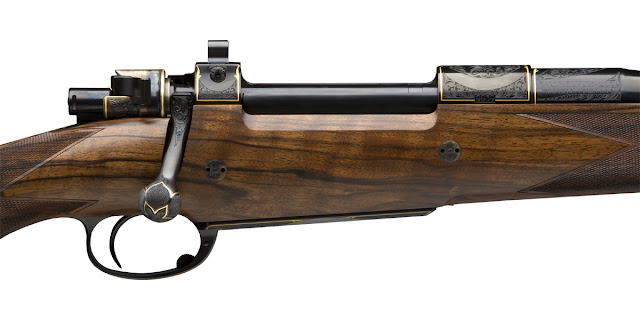